Summertime, and the livin’ is… damn sticky, for the nonce, in Southern California. And there’s another heat wave coming. The last thing I want to do is to, say, sit over a pot of saffron risotto for an hour. I’d like something cool, and refreshing, and clean, and if I were able to subsist on gin and tonic or Croma Vera Albariño, well, I’d probably do that. My doctor might suggest some other course; I bet she’d be just fine with this one.

The first trick to any bean salad is — duh — great beans. I’ve long extolled the virtues of Rancho Gordo’s heirloom beans, and that’s where I started. The bride and I are particularly fond of their Royal Corona beans, which are kin to the Gigandes plaki, often spelled as yigandes, used in the great Greek meze served under an expansive canopy of tomato sauce and often accompanied by Feta cheese and bread. Rancho Gordo founder Sando is something of a bean whisperer, and cultivates heirloom beans all over the world, working with local farmers at fair prices. He is a hero, full stop.

The second trick to a good bean salad is a balance of flavours and textures. No one wants a limp bean any more than they want a wet noodle — and I mean that literally and figuratively. When I knew I would be building off a base of Royal Corona beans, I compiled a culinary dance card of prospective partners, seen below. Since this is a really adaptable bean, I knew I could go off in several directions, but not all at once. So: I decided to make it Vegan. I knew sun-dried tomatoes and marinated red bell peppers would be part of it for colour and taste and texture. Then it was a matter of filling in gaps. Celery for crunch. Capers for salt and tang. Slivered almonds for more crunch. Macerated red onion for a little assertiveness, but not too much, hence the maceration. Scallions and parsley for herbaceousness and colour. Fresh thyme for extra aromatics. There were some herbs and oil in the sun-dried tomatoes, and I decided to use them rather than rinse them off, and finish off the salad dressing as needed. 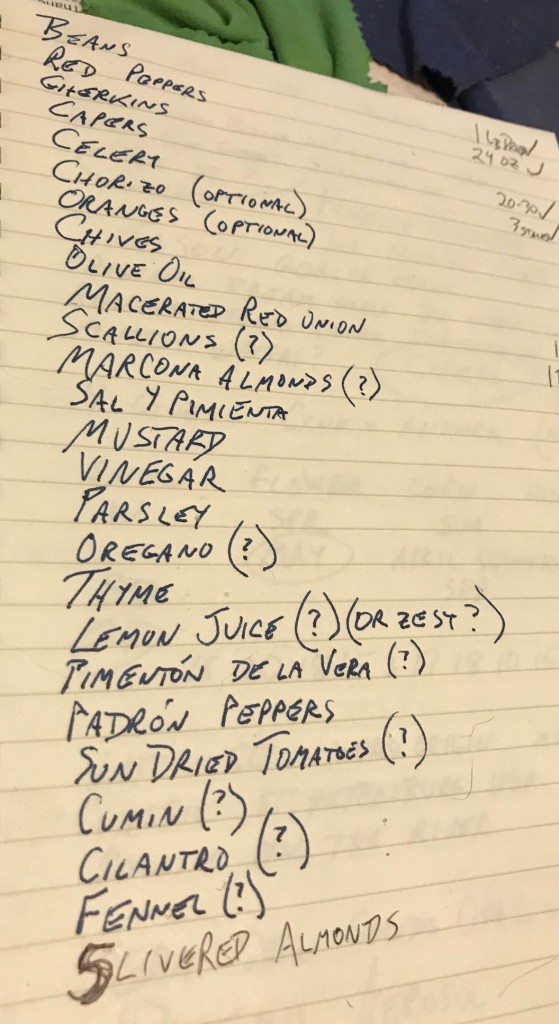 NOT “5 Livered Almonds.” The pen was malfunctioning.

This is truly a salad that can be assembled by an elementary schooler, as soon as she can be trusted with a knife (and has the upper body strength to open vacuum-packed bottles, or can inveigle someone to do it for her).

Macerating the onion in this case consists of dicing it and dropping it in a bowl with enough water to cover it, dumping in a glug — that’s a technical term — of some sort of vinegar, and about .5 cup / 170 g of sugar, then stirring it up and setting it into the fridge for an hour or so, to blunt the onion’s sharpness. It’s not quite a quick pickle, but it does temper its aggressiveness.

As for the beans, I made them in my Instant Pot®. Rinsed them, covered them with water, and set the pressure on high for 25 minutes with a natural release. You can soak them overnight if you wish, and cook them in a trad soup pot (I do this in winter, just for the atmosphere), but I was shooting for fast results. I drained the cooked beans and rinsed them with cold tap water, then dumped them in with the already macerating onion to cool them down some more. Kilotonnes of options here, feel free to follow your path.

Give it a bit to mingle flavours, and you may or may not want to top it with a vinaigrette. As it turned out for me, just a few drops of great old Balsamic vinegar and a sprinkling of black sea salt flakes (the flakes were black due to charcoal; they weren’t from the Black Sea) finished it off nicely, even on the second day.

Summer Vegan Bean Salad I
Serves 6-8 as a main course, with extras

Next go, we may find room for some of those other ingredients on the dance card, plus cucumber, jicama, nopalito, or something else!

Incidentally, if you’re not wedded to the Vegan thing, bacon & bleu cheese, prosciutto & Parmesan, or even chicken & chevre could be welcome additions.

One final and sad note: As I was writing this, I learned that the Pulitzer Prize-winning food writer Jonathan Gold died. He was as much a part of this city’s cultural life as Jim Murray or Jack Smith; he was the culinary literary equivalent for this city of the likes of Mike Royko or Studs Terkel or Herb Caen. He is simply irreplaceable, and his passing at 57 is too soon by decades. I cannot begin to imagine how much our lives will be impoverished by his absence.