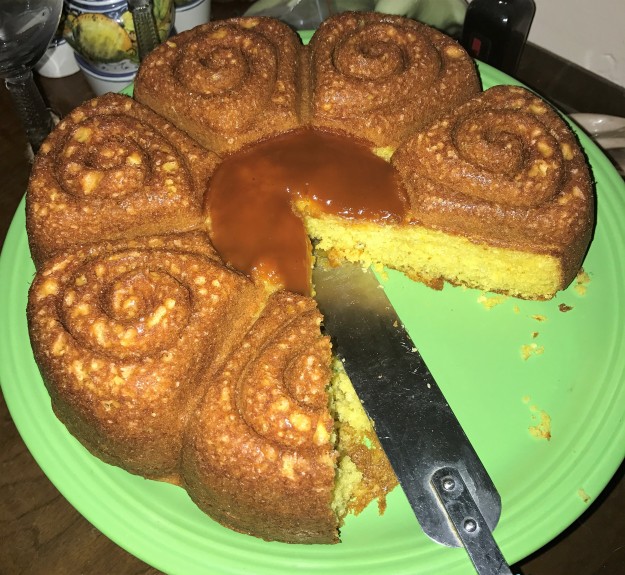 Today’s moment of Zen: Life is not a series of ever-ascending triumphs.

I made a fast-and-easy (and tasty) pudding cake yesterday, but when I unmolded it from the Bundt pan, the top part of the center segment didn’t seem to want to leave the pan. And that left me with a small problem. What could I do to make it look somewhat deliberate, or at least prevent it from appearing damaged? Since the pieces around the edge seemed to resemble a flower, I filled in the center with peach butter to help complete the illusion. Could have been anything, actually, and I may employ salted caramel or some other fruit filling next time, intentionally, because I liked the outcome. Sometimes it takes a fortuitous accident to inspire a rethink.

Preheat oven to 350°F / 175°C. Combine liquid ingredients with eggs. Add pudding and cake mix a bit at a time; beat until smooth. Pour contents into greased Bundt pan or other cake pan. Bake for 35-37 minutes in Bundt pan (less in cake pan), until a toothpick in center comes out smooth. If using a Bundt pan, cool on rack for 15-20 minutes, then unmold. Create space for filling by hollowing out a bit of the center. Add peach butter or other filling of your choice to the hollow. You could sprinkle powdered sugar on top, but it’s by no means necessary. Lots of room to play.

And you know what? If it unmolds perfectly, and you don’t wind up “customizing” it, you’ll still have a tasty cake.

Serves 8-16, depending on the size and appetite of your guests.

That plate will mean something to readers of a certain age…

Working with phyllo dough is like working with horses, musicians, or people of whichever gender(s) you find sexually attractive; it’s kind of a pain in the ass, but if you are patient and let them (mostly) have their way, you can achieve magnificent results.

Full disclosure: This recipe is derived from “Apple and Calvados Croustade” by Leslie Brenner, originally published in the Los Angeles Times on 12 December 2007. Fuller disclosure: it, in turn, was inspired by a recipe for Apple and Armagnac Croustade in the Cafe Boulud Cookbook by Daniel Boulud and Dorie Greenspan. “Okay, enough with the disclosures already” even fuller disclosure: I have interviewed Boulud and Greenspan on multiple occasions, and their recipes and aesthetic are beyond reproach. So why didn’t I just make their croustade? I’m glad I asked me that. Basically, I wasn’t feeling like apples the night I decided to make it, and pears were in season (and cheaper). It seems that the basic croustade shell could be a happy edifice for all sorts of fruit compotes (peaches, mangoes, and papayas would all likely perform well, so long as they weren’t overripe). I might even have a go at carambola — star fruit — some day, so feel free to play.

A note on alcohol, fire safety, and children. When I was a kid, helping out one or another of my grandmothers in the kitchen, I would have just adored being part of a flambé. Well, perhaps not the flambé itself, but part of the process. You are the best judge as to whether your children should be permitted in the kitchen — or the county — when you do this. So long as they stand back at least three feet, everything should be hunky dory, and perhaps even better if you say “Don’t tell [other parent or siblings] I let you help me, okay?” That’s the kind of secret kids love to keep, although they may not be successful in so doing. When it comes to fire safety, I had a sheet pan sitting out that I could employ to cover the flambé pan post-haste, breaking the “oxygen” side of the “oxygen-heat-fuel” fire triangle. Lastly, if alcohol is an issue for you, feel free to leave it out. After all, we’re basically putting a fruit compote into a phyllo dough crust, and there are no fewer than 17,583 ways to do that. 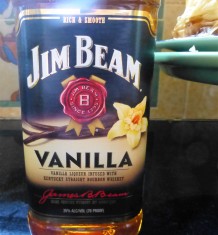 Save some for the baker.

Making your own phyllo dough: Don’t. Life is too short.

The apple version of this croustade seems to have originated in the southwest of France (the name derives from the Occitan crostada, literally “crusted”), and this style of dessert is mainly found in Midi-Pyrénées, now part of Occitanie. It may be known also by pastis (which it is called in the Quercy and the Perigord) or tourtière (in the Tarn and the Landes). In the Gers, the croustade is called Pastis Gascon (not to be confused with the aperitif!).

A bowl of Bartletts.

Peel and cut pears into 1/3″ / 8.5mm slices. Set in bowl and set aside. [Normally, I would have the bowl filled with acidulated water to prevent the pears from going brown, but since you’re going to caramelize them, that’s not an issue.] Cut the vanilla bean lengthwise in half and, using the tip of a small knife, scrape the seeds over the pears and drop the pod on top. Add the 1/4 cup / 50g brown sugar to the pears in the bowl and stir gently.

Melt 4 tablespoons / 55g / one-half stick of butter in a large skillet over medium heat. When the butter is foamy, add the pears with the vanilla and the sugar and cook, stirring occasionally and gently, until the pears are lightly caramelized and soft, about 20 to 25 minutes. Add your alcohol of choice and, standing well back while using a long match or grill-style lighter, set it aflame. When the flames subside, turn the pears over in the sauce; when the the alcohol has reduced to a glaze, transfer the pears to a bowl and allow them to cool to room temperature. Remove vanilla bean. [If you started late at night and want to finish up the next morning, as I did, or need to take a break, you can do so here. Just cover the lot with cling film, pop it all in the fridge, and come back when you’re ready to pick up again.]

Center a rack in the oven and heat it to 350°F / 175°C. Grease a 9″ / 225mm tart ring (I used the side of a springform pan) and place it on a baking sheet lined with a silicone mat or parchment. Melt the remaining butter and set it aside. Unfold the phyllo dough on your work surface and cover it with a damp towel.

Working quickly, remove the top sheet of phyllo (re-covering the remaining sheets), brush it lightly with butter, and dust it with powdered sugar. Gently and loosely crumple the dough into a circle and lay it into the pastry ring. Sprinkle it with a few of the almonds. Repeat this procedure five more times, until you have six buttered, sugared, and almond-sprinkled sheets of phyllo layered in the ring. Do not press them together — let them keep some height.

Spoon the pears into the center of the croustade, leaving a 1-inch / 25mm border bare. Working as you did before, butter, sugar, and crumple two sheets of phyllo, fitting them loosely over the pears. Sprinkle this layer with the remaining almonds, and cover this with another pair of crumpled, buttered, and sugared sheets of phyllo. Drape the phyllo artfully, so it looks good. Don’t feel bad if a phyllo sheet tears; just pick up the remaining part and arrange it adjacent to its sibling. And if it goes completely sideways, as, say, cling film sometimes will, you can make a command decision to ditch the dough or just tuck its shards someplace toward the middle for “texture.”

Slide the croustade into the oven and bake for about 10 to 12 minutes, watching the top of the tart carefully to make certain it doesn’t brown too much (depending on your oven, you may want to rotate it at the halfway mark). When the top is just lightly browned, remove the croustade from the oven.

Increase the oven temperature to 400°F / 200°C. Butter and sugar another pair of phyllo sheets, loosely crumple them and place them side by side on the previous layer to make a light, airy crown. Bake for 5 to 10 minutes, or until lightly browned, then remove it from the oven again.

Butter the last sheets of phyllo and, once again, crumple them to make a crown. Place them on top of the croustade and dust it heavily with some of the remaining powdered sugar. Return it to the oven and bake until the top layer caramelizes evenly, about 5 to 10 minutes. Check the progress of the sugar frequently, because — like toast — it can go from brown to burned in a flash. Pull the croustade from the oven as soon as the top is a golden caramel color and allow it to cool for 5 to 10 minutes. Dust it one last time with a little powdered sugar.

To serve, lift off the tart ring and, using two wide spatulas, transfer the croustade to a serving plate. Serve warm or at room temperature the day it is made, with crème fraîche, very lightly sweetened whipped cream, or vanilla ice cream.

[CODA: I used a silicone basting brush for the butter, and while it was okay, it wasn’t brilliant. A paintbrush-style brush would have worked better. It is apparently customary in France to cut these with a pair of long, sharp scissors. However you decide to do it, the croustade is going to shed some of its golden phyllo. If you’re cutting it up in the kitchen, you can gather the crumbs and arrange them as artfully as possible, or just hide them under the whipped cream. Finally, this is plenty sweet without any help, so feel free to serve it plain.]