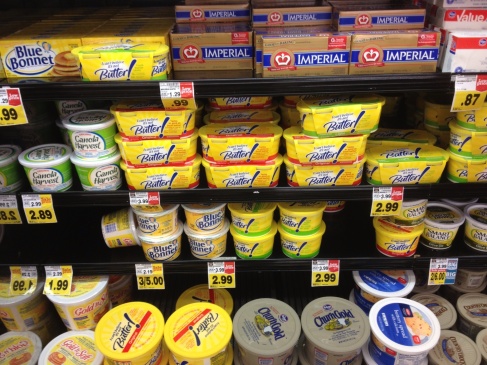 In 2013, 200 years after the French chemist Michel Eugène Chevreul discovered margaric acid (the vital building block in making the original version of margarine), it’s pretty safe to say (in the manner of the final pronouncement on Iron Chef), in America at least, “The Margarine Battle is OVAH!” Go to the store; try finding something labeled as margarine. Seriously. It just ain’t there. Sure, there are old favourites, such as Parkay and Blue Bonnet and Imperial, all of which used to call themselves margarine, but the word itself is as welcome on their packaging these days as ants at a picnic. 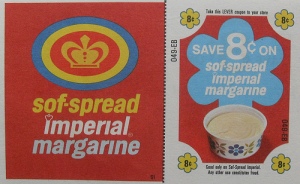 Originally produced in 1869, when another French chemist, Hippolyte Mège-Mouriès, rose to a challenge posed by Emperor Napoleon III to make a butter substitute for the armed forces, the new foodstuff was originally called oleomargarine, later shortened to the trade name “margarine.” Mège-Mouriès tried to make a go of producing it commercially, but it failed, and he sold off the patent to the Dutch company Jurgens (not to be confused with the American company founded by Andrew Jergens of Jergens Lotion fame, though both made soap). In 1930, the company merged with Lever Brothers to form Unilever, which continues to make margarine — much of it not billed as such (including Promise, I can’t believe it’s not Butter!, and Country Crock) — even today.

Americans have long had a love/hate relationship with margarine, especially in the dairy states, where manifold laws were passed to marginalize its ability to compete with butter. In 1885, Pennsylvania banned the sale of “any oleaginous substance, or any compound of the same, other than that produced from unadulterated milk or of cream from the same, any article designed to take the place of butter or cheese produced from pure unadulterated milk, or cream from the same, or of any imitation or adulterated butter or cheese,” but it was held unconstitutional by the Supreme Court in 1898. An even more comical statute was passed in New Hampshire, which required margarine to be dyed Pepto-Bismol pink, and it too was struck down by the Supreme Court in Collins v. New Hampshire, 171 U.S. 30. The court concluded, quite sensibly, that “If this provision for coloring the article were a legal condition, a legislature could not be limited to pink in its choice of colors. The legislative fancy or taste would be boundless. It might equally as well provide that it should be colored blue or red or black. Nor do we see that it would be limited to the use of coloring matter. It might, instead of that, provide that the article should only be sold if mixed with some other article which, while not deleterious to health, would nevertheless give out a most offensive smell.” 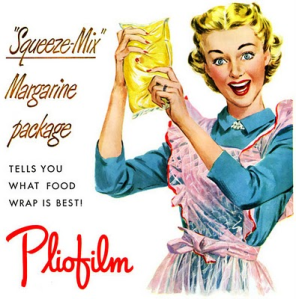 While the states were prevented from altering the product, that didn’t mean that the dairy lobby tucked its bovine tail between its legs and headed back to the barn. Margarine in its natural state is white, so states began to pass laws preventing margarine manufacturers from “adulterating” their product with yellow dye, and many of them levied a significant tax on any margarine that was so modified. By the turn of the 20th century, the dairy lobby had largely succeeded in cutting margarine consumption by more than half. Margarine manufacturers responded by enclosing a special bonus packet of yellow pigment with their wares, so homemakers could DIY their dye. [These colour restrictions persisted in Québec, believe it or not, until 2008!] 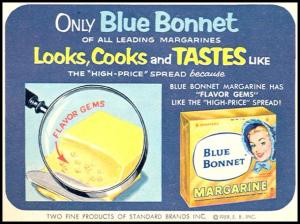 In fact, Wisconsin even today has a whole subsection of its state food regulations devoted to oleomargarine, including:

It is also prohibited from being served to Wisconsin “students, patients or inmates of any state institutions” unless “necessary for the health of a specific patient or inmate.”

On the national level, the FDA takes over 700 words to define margarine, and the USDA requires that margarine “Shall possess a fine and pleasing buttery flavor. May possess acid, bitter, coarse, flat or oil flavors to a slight degree.” (I’m guessing nobody ever got prosecuted over that.) 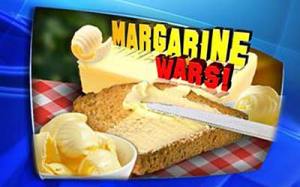 What flattened the margarine industry (or, more appropriately, the use of the word “margarine”) was the Great Trans Fat Scare of the ’90s. Trans fats, for those of you who skipped either the Food section of your local newspaper or chem class, are unsaturated fats (either mono- or poly-) that have been “partially hydrogenated,” or have had hydrogen added to them, in order to increase shelf life and decrease the need for refrigeration. They’re a cheap substitute for other fats and oils that suspend solids at room temperature, such as palm oil, lard, and butter. They have been linked to increased incidence of coronary heart disease, liver dysfunction, Alzheimer’s Disease, diabetes, cancer, and infertility, among other things. But they’re cheap, and market forces have brought them into our diet in great quantities. Since many margarines/buttery spreads/butter substitutes contained these chemical pariahs, they got swept up in the anti-trans-fat movement. To their credit, most butter substitutes — the former margarines — no longer contain trans fats (though some still do). But the damage was done. The margarine moniker had to go.

These days, there’s a fair case to be made that butter substitutes are no worse for you, and possibly even better, than butter. After all, butter is richly laden with saturated fat, which is itself associated with coronary heart disease. And then there’s the whole animal exploitation/treatment issue, which is another topic for another time, but deserves consideration. Wise consumers will peruse the product’s contents (trans fats are now required to be identified separately from saturated and unsaturated fats), and choose accordingly, striking a balance between the palate and the peril.

Whether you opt for buttery spread, butter substitute, vegetable oil spread, or some other ersatz dairy product, when they say, “I can’t believe it’s not Butter!” you would be more than justified to respond with, “And I don’t believe it’s not margarine.”