No, I didn’t make my own stock or grate my own cheese this time; please don’t judge

In what passes for winter in Southern California, one may on occasion wish for a wintry dish, and nothing fills that bill quite like risotto. There are a million ways to make it, but I had a hankering for some peas, and I had gotten a great deal on some frozen (and pre-cooked) langoustine, so I cogitated on what spice might work well with the two of them; I settled on saffron. I had some that my brother had brought back from Turkey, and a little (slightly fresher, if not as exotic) Spanish saffron from Trader Joe’s, each of which made it into the final mix.

Risotto (or “little rice”) can be traced back to 16th century Milan, though rice’s role in Italian cooking predates that considerably, having likely been introduced by the Arabs who conquered Sicily in the 9th century. By many accounts, saffron arrived in Italy in the 13th century, though it’s not clear who brought it in. Why it took the Italians three centuries to marry saffron and rice in this dish is something of a mystery, but it just bears out the thesis that risotto is the great-granddaddy of the slow cooking movement. Arborio rice, which is central to the dish, is a short-grain rice named after the town of Arborio in the Po Valley, where it is grown. [Some areas in Italy use other varieties of rice; Milanese chefs are said to prefer Carnaroli rice, while Vialone nano is more popular around Venice. Neither are as widely available in America as Arborio, though both can be found at Italian specialty markets or through Amazon.]

Two things about risotto: First, don’t be intimidated. It’s time consuming, no doubt, but once you get your head around that, it’s really not hard to make a very tasty, elegant dish that will wow your friends (or, in this case, endear me to The Bride). Second: There is no speed round when it comes to risotto making. Commit to stirring constantly for the better part of 45 minutes. Think of it as a kitchen meditation, where all the world’s cares drop away and you can focus on the gastronomical, physical, and spiritual union of stock and rice. 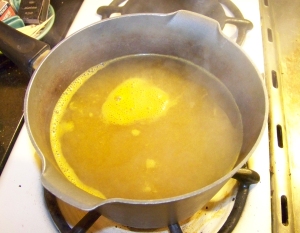 DIRECTIONS:
First, bring the stock just barely to a boil, then set it back to a simmer. If you have not yet defrosted the langoustine (they often to tell you to do it the night before by moving them from the freezer to the fridge, but I rarely plan that far ahead), take them from the freezer, put them in a sealed plastic bag, and set the bag in warm water. Since they will only be at this warming temp for about 40 minutes or so, you don’t need to panic about bacterial bloom or other fishy evils.

Stir until the rice is coated and begins to turn glassy

Add a ladle (about 125ml / 1/2 cup) of the heated stock to the rice mixture and use a wooden spoon to stir until the liquid is completely absorbed. Why wood? It’s so much nicer than plastic, isn’t it?

Continue to add the stock, one ladle at a time, stirring constantly and allowing the liquid to be absorbed before adding the next.

As the rice absorbs the stock, it gets creamier

Cook until the rice is just tender and the risotto is creamy (this will take at least 25 minutes — DON’T RUSH).

Ready for the last little mix; langoustines, peas, and cheese

Add the langoustine, peas, and saffron, and cook, stirring, for 3 minutes or until well combined and heated through. Remove from heat and stir in the Parmesan. Taste and season with salt and pepper. Remember: the Parmesan brings its own saltiness, so have a light hand with the NaCl! You can always add more salt — even at the table — but you can’t take it away.

Spoon the risotto into bowls and serve immediately. Try not to consume it like a just-uncaged wolverine.

2 thoughts on “Saffron Risotto with Peas and Langoustine”