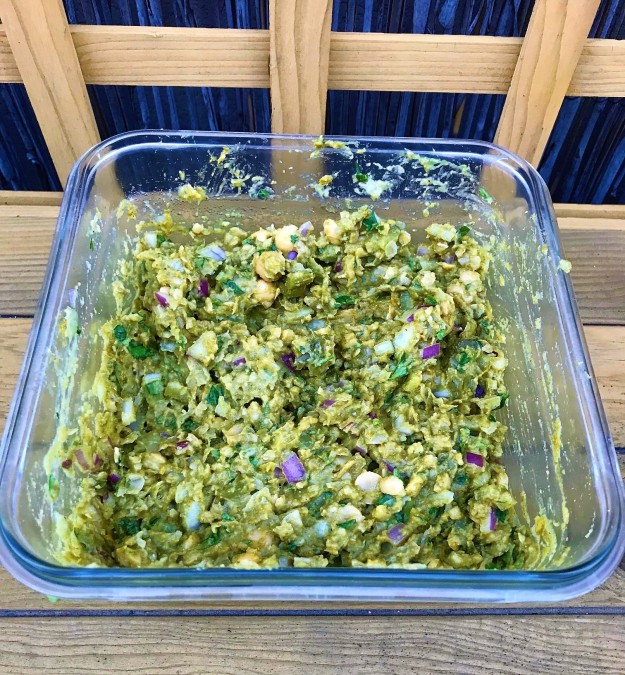 It takes all my will to keep from eating it directly from the bowl.

Total dishes dirtied in the course of making this recipe: 1. [Plus five utensils: the can opener, potato masher, knife, fork, and measuring spoon. Oh, and I had to clean off the cutting board that lives on top of the right-hand sink.] That in itself gives this recipe a warm place in my heart.

Big ups to Jessica Prescott, from whose book Vegan Goodness: Delicious Plant-Based Recipes That Can Be Enjoyed Everyday this recipe was adapted. Further thanks to Deb Lindsey and Joe Yonan of the Washington Post, the former for making it look appetizing enough to try, and the latter for testing the recipe so I could goof with it in my own kitchen.

This takes literally about 10 minutes to pull together, even if your knife skills are as poor as mine, and it packs a wallop, taste-wise. Also, if you prefer to make this with garbanzo beans rather than chickpeas, they are an acceptable substitute.*

[NOTE: The amount of onion and/or coriander can vary widely according to taste. I like mine with a little more kick, which is why I go to the high end of the recommendation. Also, I use twice as much curry powder as was in the original recipe, I think partly due to my palate and the fact that my jar of curry powder has a little age on it and may have mellowed. To me, the main bar to clear is finding the right bread-to-filling ratio. If the bun is too big relative to its surface area (like a slider bun), you’ll have too much bread. On the other hand, if you toast regular sandwich bread, you need to go a little light on the filling for structure’s sake. Believe me, it’s a fun problem to have to work out.]

Combine the chickpeas, oil, and lemon juice in a medium bowl or flat bottomed storage container such as the one pictured at top. Smash with a potato masher or fork until fairly chunky (try to leave no chickpea whole). Stir in the avocado, minced onion, pickles, cilantro/coriander, curry powder, salt, and pepper. [If you are using this as a dip for pita, chop the spinach and mix it in; otherwise, reserve it for the sandwich building, directions to follow.] Taste, and adjust spices as needed (I often add more lemon juice and/or olive oil to keep it from being too dry, especially if I’m using it as a dip rather than a sandwich filling).

If you’re not using this as a dip for pita bread, place a few baby spinach leaves on the bottom halves of the toasted rolls (or bread) and top with the chickpea salad. Top with the remaining halves of the rolls/bread, and slice in half if the resulting sandwich seems unwieldy.

*Chickpeas and garbanzo beans are the same thing. That was a joke.

The bride’s keen on grain bowls lately, and I’m about 47.8% less enthusiastic about quinoa than she is, so I have been poking around for alternatives. While at the store, ostensibly to pick up some farro, I saw this thing in the grain section that looked like a sibling (of farro’s, not of mine): Kamut®. I had no idea what Kamut® was, but that didn’t stop me from bringing it home like a stray culinary puppy. Long story short, it’s a variety of wheat, whose journey out of Egypt was perhaps less tortuous than, but nearly as interesting as, the Jews’.

Allow me to quote from the trademark owner’s website:

The story of KAMUT® Brand khorasan wheat began in 1949, when Earl Dedman, a US Airman stationed in Portugal, received some unusual looking grain from a friend who claimed to have taken it from a tomb in Egypt. More likely, the friend had purchased it from a street vendor in Cairo, Egypt with the story that it had come from an ancient Egyptian tomb. Earl sent thirty-six kernels of the wheat to his father, R. E. Dedman, a farmer near Fort Benton, Montana. Within six years, the elder Dedman had grown the small number of seeds into 1,500 bushels, calling it “King Tut’s Wheat.”

In 1977, it fell into the hands of Robert Quinn, who tried unsuccessfully to get the people who make Corn Nuts to manufacture a wheat version of the snack with this grain. But Quinn and his dad continued to grow it on his family farm, which went completely organic in 1989. The following year, the USDA recognized the grain as a protected variety officially named “QK-77,” and the Quinns registered Kamut® as a trademark to guarantee that the original grain would remain unmodified and always be grown organically. From there, it got licenced to dozens of producers and is used in products from cereal to pizza… to this grain bowl.

This recipe follows a general formula I’ve developed for grain bowls: grain, some roasted/pan-fried vegetables, an element to add at least a bit of crunch to the texture, wilted greens for a little bitterness, some salt, and an acid (tomatoes, lemon juice, vinegar, or, in this case, toum) as a brightening agent. Please don’t shackle yourself to this recipe! It was created and modified on the fly, riffing on literally dozens of other options I sifted through from Pinterest pages and Google searches. 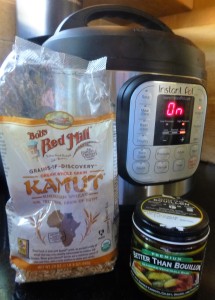 A NOTE ON COOKING KAMUT®: A little searching on the Internets yielded some insight on how to cook it in an Instant Pot. Much like dried beans, the typical method for preparing Kamut® is to soak it overnight in water (or, in my case, vegetarian bouillon), but I didn’t have the time for that, and I — quite fortuituously — did have an Instant Pot. Much thanks to cookbook author Kathy Hester, whose The Ultimate Vegan Cookbook for Your Instant Pot: 80 Easy and Delicious Plant-Based Recipes That You Can Make in Half the Time yielded the info that if you press the “Adjust” button once after having set the Instant Pot up on the “Multigrain” cycle, “it will look like it’s going to cook for a normal 60 minutes. But on this setting — only on the multigrain 60-minute cycle — the grain first gets a 45-minute warm water soaking before the 60 minutes pressure cooking time. It’s great for Kamut® and other long-cooking grains.” If you don’t have one of these marvelous devices, you can just soak the grain overnight and prepare it according to the directions on the package. That method works just fine, even if it’s a little (well, a lot) longer. [Reminder from Russ Parsons, former LA Times food editor: “Rinse thoroughly. I mean thoroughly. In a strainer under running water.”]

One cup of dry Kamut® looks like this when cooked.

A NOTE ABOUT TOUM: Toum is a garlic-based Lebanese dipping sauce not far removed from aioli or the Ligurian agliata. The best recipe for it that I’ve found is at the Tori’s Kitchen website (she even thoughtfully includes step-by-step photography). If I deviate from her recipe at all, it’s usually to add more garlic, the cowbell of the pantry. There’s just never enough. When you’re making it, be sure your water and lemon juice are really cold, or the sauce might break up. But it’s super tasty, simple to make, and you will discover a million applications for it, from grilled veggie sandwiches to tater tots to pasta.

A Cuisinart full of toum.

I was generous with the toum.

Cook Kamut® according to instructions (see A NOTE ON COOKING KAMUT®, above). Set aside.

Make toum according to instructions (see link in A NOTE ABOUT TOUM, above). Set aside.

Chop onion and bell peppers, place in bowl, and set aside. Meanwhile, heat olive oil in large pan on high heat until just about smoking. Add cooked Kamut® and toast, stirring occasionally, about 5 minutes or until slightly browned. Lower heat to medium and stir in onion and peppers. Cook for about 8-10 minutes, or until veggies have softened, stirring occasionally. Meanwhile, wash and chop greens. When vegetables have softened, add chopped greens and stir until wilted. Add cashews, stir, and salt to taste. Top with toum and serve. Serves 2-3 as main or 4-6 as side dish.

Asked the bride last night if she had any ideas for tonight’s dinner, and she responded with, “I pinned some grain bowls on my Pinterest page.” Some people find Pinterest really useful and convenient. I am not one of those. So after I looked through all 266 pins in the “No Animals Were Harmed” folder, I wound up (as I often do) perusing Food & Wine’s website. On it, I found this recipe, for Kale-and-Shiitake Fried Rice. It was pretty close to where I wanted to go, but it had eggs, and I was in a vegan mood, so I made a few simple mods for tonight’s meal.

This is super easy to whip together if you already have some cooked rice lying around, so I made a bunch in the Instant Pot last night before going to bed. Obvs, you can use any type of rice, but I find that brown Basmati rice is a good middle path between an insipid white and a cloying brown. The author of the Food & Wine recipe (David Lebovitz) recommended day-old rice, which he says works better to absorb the flavourings. Makes sense, since it will dry out a bit in the fridge overnight. As far as the greens go, I used a mix from the local market, but you could easily add or substitute arugula, collard greens, turnip greens, watercress, or even the leafy part (not the stem) of bok choy. Mustard greens, on the other hand, might overpower the dish, so have a care if you are thinking of adding them.

[NOTE: I love my Instant Pot; I made a whole slew of rice all at once with nary a care. Typically, the recipe for rice in the Instant Pot calls for a 1-to-1 ratio between liquid and dried rice; for brown rice, however, I’ve found that a 1.25-to-1 ratio of liquid to rice works better. Also, the “Rice” button on the front of the cooker is calibrated for white rice. If you are making brown rice, you’ll want to cook it at high pressure for 22-24 minutes, then let the cooker depressurize naturally, which takes about 10 minutes.]

In a wok or large skillet, heat the oil. Add the ginger, almonds, scallions, and a pinch of salt. Cook over moderately high heat, stirring constantly, until the ginger and scallions are tender, about 2 minutes. Add the sliced mushrooms and a generous pinch of salt and cook, stirring occasionally until tender, about 5 minutes. Add the greens, season with salt and stir-fry until wilted, 2 to 3 minutes. Add the cooked rice and stir-fry until heated through, about 3-5 minutes. Serve immediately.  Serves 2 as a main course (see bowl in picture), or 4-6 as a starter or side.