Wolfgang and Oscar, together again

Yeah, I know I’m going to hell for the puns. I think it was the endless hours of watching Rocky & Bullwinkle as a kid, in which upcoming episodes would be teased with titles such as “The Midnight Chew-Chew, or Stick To Your Gums” and “Fuels Rush In, or Star Spangled Boner.” In 2012, I had the opportunity to interview Wolfgang Puck, who was as charming on the telephone as he is on the television (and, presumably, in person). I realize that one doesn’t climb to the Elysian heights that Puck has ascended without a healthy double dollop of ego, but I found him to be surprisingly modest. Much like Emeril Lagasse, Puck has built a loyal cadre around him, many of whom have been in his employ for upwards of 20 years, which is no mean feat in the remarkably transient business of hospitality.

And, like virtually everyone who has achieved justifiable fame in the cooking profession (I’m pointedly leaving out many — though by no means all — of TV’s instant celebu-chefs, who maintain a virtual chokehold on the Cooking Channel and the Food Network “reality” shows these days), he laboured for years before ever penetrating the public consciousness, leaving home at 14 to work as an apprentice at a bakery. His first major gig in America was in Indianapolis, of all places. 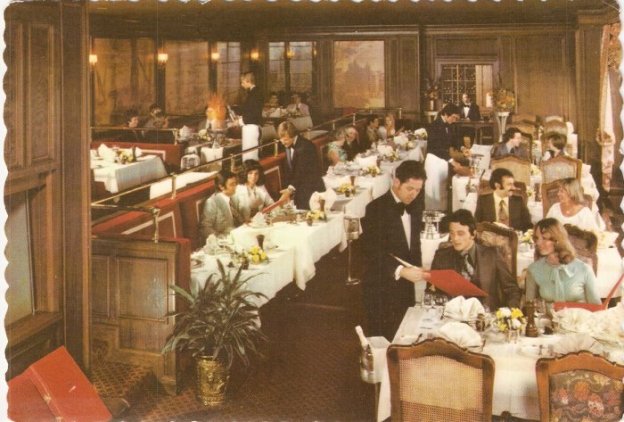 It was all glamour and glitz from there, Oscar parties and multi-million dollar deals, but his passion for food still comes through in conversation. In fact, here’s a recipe he gave me for Savory Squash Soup that can be served warm or cold, making it an excellent year-round dish. 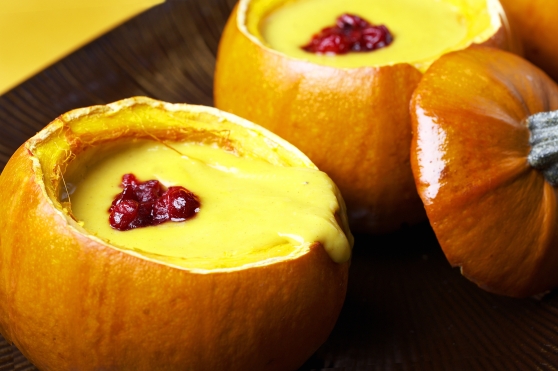 Cut each squash in half and discard the seeds. Brush cut sides with 2 tablespoons of melted butter. Season with salt, pepper, and nutmeg. Arrange the squash cut side down in a roasting pan and bake until tender, about 1 hour. Cool, scoop out the insides of the squash, and purée the flesh in a food processor. Reserve. (You should have about 6 cups of puréed squash.)

In a medium stockpot, melt the remaining 4 tablespoons of butter. Over low heat, sauté the onion. Do not allow it to brown. Add the puréed squash and cook over very low heat until heated through, stirring occasionally. Do not allow it to bubble up. Season with the salt, pepper, ginger, and cardamom.

Pour in the stock and bring to a boil, still over low heat, stirring often. Cook about 20 minutes.

In a small saucepan, heat the cream with the rosemary sprig. Remove the rosemary and pour the cream into the soup. Transfer to a blender or food processor and process, in batches, for 2 or 3 minutes. Adjust the seasoning to taste.

To serve, ladle the soup into heated bowls. Place a tablespoon of Cranberry Relish in the center, top with a dollop of Cardamom Cream, then sprinkle with chopped pecans. Drizzle pumpkin seed oil over soup.

Note: If desired, bake small squash until tender, scoop out, and use as individual serving bowls.
Note #2: You don’t need to make the full recipe for the Cranberry Relish if you’re using it only for the soup. 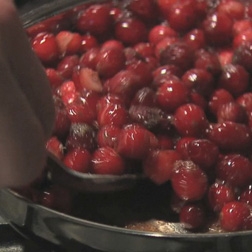 In a small saucepan, combine all the ingredients. Bring to a boil, then lower to a simmer. Continue to cook until the mixture is thick and the berries are glazed. Allow to cool. Transfer to a covered container and refrigerate until needed.

Add pecans to a pot of boiling water in two batches, boiling for two minutes. Drain and shake off all excess water.
Sprinkle salt and cayenne over nuts. Coat with sugar, allowing the sugar to melt into the pecans.
Toss the nuts in the strainer, slowly adding all sugar. [NOTE: Do not use utensil to toss.]
Carefully add nuts to hot oil. Cook until golden brown, about 3 minutes, stirring occasionally.
Remove with slotted spoon and allow to cool on cookie sheet.

Last summer, I was contacted by the American editor of Style magazine (then Sands Style) to see if I would like to interview Chef Emeril Lagasse for the relaunch of the magazine. Like every cooking fan in America, I’d seen Emeril a gazillion times; unlike many cooking fans, I’ve eaten at one of his restaurants in New Orleans. Naturally, I agreed.

Despite his fireplug stature, Lagasse looms larger than life in virtually ever aspect of his being. He is immediately gregarious and extraordinarily self-effacing. He’s passionate about food. He loves to teach and to share what he’s learned. And he is remarkably generous in spirit.

Here’s a story that didn’t make it into the piece I had published: Part of the craft of managing a celebrity interview is figuring out what to ask him or her first. Way back when I was in college, my brilliant journalism spirit guide, Joseph N. Bell — a lecturer, because he was a working stiff, not an ivy-clad professor — told his class that something like 75-80% of one’s energy prepping for an interview should be devoted to formulating the first question. Famous (and even semi-famous) people are subjected to an endless parade of clueless journos who haven’t read their book or seen their movie or listened to their record, who inevitably kick off the interview with some slow-pitch softball such as “So… what inspired you to _____?” B-o-r-i-n-g. Shockingly, the rest of that sort of interview winds up with a lifeless string of canned answers to the canned questions.

The night before I was to chat with Chef Lagasse, The Bride suggested I might mention a shrimp and grits recipe she’d had at NOLA several years back, and for which she desired the recipe. “Excellent!” I thought. “Here’s a way under his radar.” 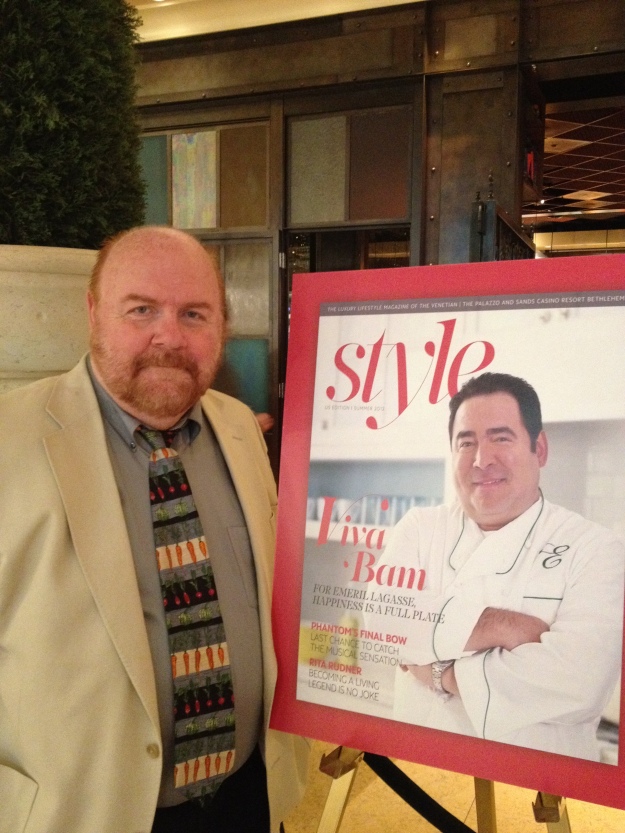 The cover, larger than life. The pic of Emeril, not so much.

Our phoner kicked off with the typical pleasantries; underneath it all, I’m sure he was probing to see if I was actually interested in and/or knowledgeable of what he was doing, and I was curious to ascertain whether he was full of camaraderie when the red light was on, only to turn cold as a fish case haddock in its absence. As luck would have it, the two of us fell into sync more or less immediately. Even without asking, when I relayed the story of The Bride and The Grits, he responded with, “I’ll be happy to send you the recipe.” Within an hour of our interview’s conclusion, he (or one of his minions, at his direction) had.

Like most celebrated chefs, Lagasse had served his Malcolm Gladwell 10,000 hour apprenticeship many times over. And, like virtually all of the chefs I’ve had the pleasure of interviewing, he was generous to a fault regarding his team. Many of Emeril’s krewe have been soldiering on with him in excess of a decade (some even two!), a surprising display of loyalty considering the fluidity of movement in the world of haute cuisine. Clearly, the man is doing something right.

Some time after the story was filed, my editor invited me to the magazine’s relaunch in Las Vegas. The Bride and I made the pilgrimage, given that the magazine was kind enough to comp our hotel room. Emeril was just as engaging in person as he had been over the phone, and — ever the businessman — he asked his assistant to jot down my contact info, should we be of some mutual benefit sometime in the future. Fair play, that. I hope our paths cross again, even if just to hear him say “BAM!”

Every now and then, we all aspire to kick it up a notch.

Here’s a link to the article.

And this is the shrimp and grits recipe that kicked off our conversation: 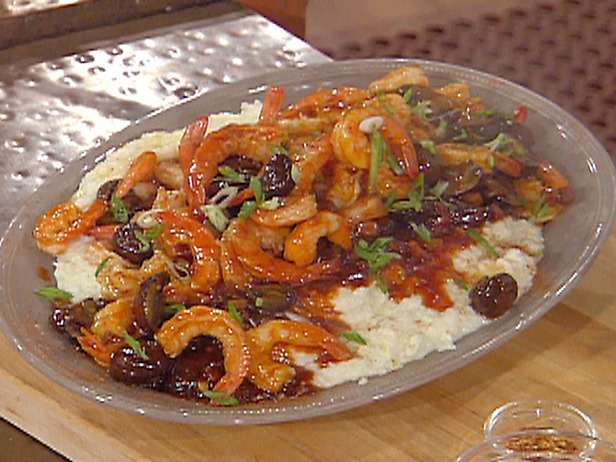 In a large bowl, combine the shrimp with the Essence and salt and toss to blend. Set aside as you prepare the skillet. Place a large, 14-inch skillet over high heat and add the olive oil and heat until very hot. Add 1 tablespoon of the butter to the pan. Swirl to melt, then add the shrimp to the pan, being sure that the shrimp are in one layer in the pan. Sear the shrimp until well caramelized on the first side, about 1 minute. Turn the shrimp over and add the smoked mushrooms, bacon and Abita BBQ Glaze to the pan. Continue to cook, stirring occasionally, until the shrimp are well coated with the sauce and just cooked through, about 3 minutes. Add the remaining butter to the pan and swirl until melted into the sauce.

To serve, divide the grits between 8 entrée-sized shallow bowls. Drizzle about 2 tablespoons of the Citrus Beurre Blanc around the edge of the grits near the rim of the bowl. Divide the shrimp, mushrooms, bacon and sauce evenly between the bowls, and place a grilled green onion on top of the grits in a circle. Serve immediately.

For the Emeril’s Original Essence:

For the Smoked Cheddar Grits:

In a large, heavy saucepan bring the water to a boil. Add a generous teaspoon of salt and the grits and stir with a wooden spoon to combine. When grits thicken, add the milk, cream and butter and return to a boil. Reduce heat to a simmer, partially cover the sauce pan and cook for 45 minutes to one hour, until grits are very tender, smooth, and creamy-thick. Add the cheddar, season with black pepper, and stir until cheese is melted. Serve hot.

For the Citrus Beurre Blanc:

Place all the ingredients except the heavy cream and butter in a 1-quart saucepan and place over high heat. Bring to a boil and reduce until the liquid is nearly evaporated, 12 to 14 minutes. Add the heavy cream to the pan and reduce by half, 1 to 2 minutes. Remove the pan from the heat and reduce the temperature to medium low. Add a few cubes of the butter to the pan and use a whisk to stir constantly until the butter is melted. Return to the heat and add a few more pieces. Continue to place the pan on and off the heat, adding a few cubes of butter to the pan and whisking until all the butter is used. Remove the sauce from the heat and strain through a fine-mesh strainer. Keep warm until ready to serve – do not allow the sauce to boil or it will separate.

For the Abita BBQ Glaze:

Combine the ketchup, beer, brown sugar and crushed red pepper in a saucepan and bring to a boil. Reduce heat slightly and continue to cook at a steady simmer until the sauce is translucent and reduces to a consistency thick enough to coat the back of a spoon, 5 to 10 minutes. Set aside. You should have about 1 1/4 cups of glaze.

For the Smoked Cremini Mushrooms and Rendered Bacon:

In a medium bowl, combine the mushrooms, Essence and olive oil. Toss to combine and place on the rack of a stovetop smoker. Prepare the smoker over medium-high heat using applewood smoking dust, or the smoke chips of your choice. When the smoker begins to smoke, close the lid. Smoke the mushrooms until cooked through, about 20 to 25 minutes. Remove from the smoker and set aside until ready to use.

While the mushrooms smoke, place the bacon in a 10-inch sauté pan over medium-low heat and render the fat from them until they are just beginning to get crispy, 10 to 12 minutes. Remove the bacon from the pan using a slotted spoon and transfer to paper towels to drain. Set aside until ready to use.

For the Grilled Green Onions:

As served at NOLA.