Not the prettiest soup, but it has a great personality.

One happy consequence of my current sixty-day Facebook cleanse is that I am spending more time researching (and cooking) recipes of all sorts.

If ever there were a happier marriage between a vegetable and an herb than potato with dill, I don’t think I’ve found it. And while I’m sure some of you might respond reflexively with “Yeah, what about tomato and basil, smart guy,” I’ll meet your snark with the pedantic retort that the tomato is technically a fruit and move on. The Potato Pickle Pot moniker is a nod to the Afro-Caribbean soup/stew known as Pepper Pot, although this particular soup’s roots seem to be Polish, where it, like its African cousin, is often made with cheap cuts of meat and is known as Zupa Ogórkowa. [My rebranding it as Polish Peasant Potato Pickle Pot seemed to be dipping an already gilded lily into Belgian chocolate fondue, so I dialed it back.] Both soups historically depended on available ingredients (peasants, y’know, can’t be choosers), so you’re welcome to think of this more as a template than a recipe. I’m sure no gendarmes from the local potagerie will be dispatched if you sneak in a turnip, some carrots, a rutabaga, or even some cabbage.

Many non-vegan iterations contain butter, milk, and even sour cream, but I was committed to a vegan version, and much like Magda at the I Deliciate.com blog, I considered — and then rejected — adding cashew cream. The puréed taters bring a rustic silkiness to the broth on their own. As with yesterday’s “Sofrito” Soup recipe, I opted to employ my Instant Pot® as a time-saving device to soften the potatoes, but the recipe is easily transferable to the stovetop. Just follow the directions for sautéing the onion, garlic, and potato, then add the broth/almond milk combo and simmer it until the potatoes are fork-tender (as if ready to be mashed). I expect that would take about 40-ish minutes, depending on how small your potato chunks were cut.

Of all the versions of this soup I researched, the one to which I owe the greatest debt came from a fellow Canadian, the woman who ran the One Vivacious Vegan blog out of Winnipeg, Manitoba. It’s little wonder she wanted a sturdy soup back in the fall of 2012; winters up there are doggone cold, and surprisingly long.

Halfway through, it’s really not a pretty sight.

Chop onion, garlic, and potatoes and put them in separate bowls. Add oil to inner cooking pot, and set the Instant Pot® to its “Sauté” function. Sweat the onions until somewhat softened, then add the garlic and continue to sauté for another two minutes, stirring occasionally to make sure nothing adheres to the pot. Add chopped potatoes and continue to sauté for 3-5 more minutes, just to warm the potatoes a bit and get them interacting with the onion and garlic. Add stock, almond milk, and chopped dill; stir together. Hit the red “Keep Warm/Cancel” button on the control panel.

Cover pot and lock lid (making sure the vent is set to “Sealing”), select “Soup,” set pressure to “High,” and time to 20 minutes. When finished, you may allow pressure to release naturally before unlocking lid, or you can do a “quick release” by turning the vent to “Venting.”

Process soup with immersion blender or in batches in a blender/food processor. [If you’re using either of the latter, drape a towel over the input tube or lid to allow the steam to vent.] You can pureé all of the soup at this point, but I like to leave a few of the chunks of potato intact. Add nutritional yeast, pickle brine, and chopped pickles. Stir and allow soup to sit for a couple of minutes before tasting and adjusting spices. Depending on your taste, you might want to add a little more pickle brine or dill to the mix, along with salt and pepper.

Ladle soup into bowls and garnish with a sprig of chopped dill. A baguette would be nice with this, although prudence would mitigate; you’ll have had a full day’s worth of carbs in the soup.

One of the very first Greek dishes I can remember tasting (long before I ever visited Greece) was a deli-style version of this soup. This version recreates it fairly well (except for the chicken pieces), presuming my taste memory is accurate. The big plus here is that it can be made in a little more than half an hour, and requires practically no prep.

Avgolemono is the Greek compound word for “egg” and “lemon,” and doesn’t necessarily refer to the soup (an egg-lemon sauce that shares the name is used widely with pork, chicken, and grape leaf dishes). That said, avgolemono is often called the “national soup of Greece,” even though research seems to indicate that it likely originated in Portugal or Spain, quite probably among the Sephardic Jewish popuation. [It’s probable that they were also responsible for the original Tarta de Santiago, whose picture adorns the top of this blog.]

A couple of notes. I happen to like the version thickened with potato starch in the winter, when I’m serving it hot. In the summer, I tend to serve it chilled, and without the extra thickener. No need to be too fussy about any of the amounts here; the recipe is easily halved, and you can use less or more orzo or lemon depending on your taste. I recently added the lemon zest and white pepper to the mix, and I find they both give the soup a subtle boost. The beauty part about the orzo (as opposed to rice, which is used in some recipes) is not only that it’s a great way to use up excess cooked pasta if you have it, but since dry orzo only takes 7-9 minutes to rehydrate, you don’t have to cook it separately. If you have leftover cooked rice, you can easily substitute it for the orzo. [Dry rice will take 40 minutes or so to reconstitute.]

Cook’s Illustrated and America’s Test Kitchen named Orrington Farms’ Chicken Flavored Vegan Broth Base & Seasoning as the best commercial starter for vegetable broth, and the latter published a recipe for making your own base. The downside of most store-bought vegetable stocks is that they’re sodium bombs, and many of them just don’t taste very good. The lemon in this recipe does a decent job of masking their weaknesses, but the better a veggie broth you use for a starter, the better the finished product will turn out.

Tempering the eggs and lemon juice.

1. Heat vegetable stock and chopped dill (if you’re using it) in large pot or Dutch oven, to just below boiling. Add dried or cooked orzo when stock is warmed. DO NOT allow this to come to a boil, or it will curdle when you add the egg and lemon mixture, below.

2. While stock is heating, whisk eggs and lemon juice in a separate bowl.

4. if thickening with potato starch, place 1 tbsp. / 12 g in the bowl in which you tempered the eggs. Gradually whisk in a ladle of liquid from soup pot until you have a slurry free of lumps. Transfer slurry to soup pot and simmer for 15-20 minutes, stirring occasionally to keep orzo from sticking to the pot. Soup will thicken noticeably, enough to coat spoon.

5. Zest lemon over soup pot just before serving, and stir to incorporate. Whisk in white pepper to taste (if desired), and ladle soup into mugs or small bowls, making sure to get plenty of orzo. Garnish with dill if desired. 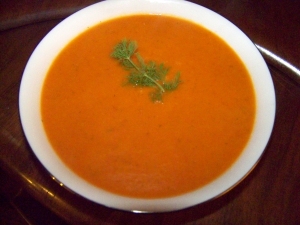 Despite the widely-held belief that “it never rains in southern California,” it does, albeit not often enough. Tonight, for instance, was a prime example of the occasionally intemperate nature of SoCal weather; a much-needed downpour, most of which would wind up in storm drains on a quick trip to the Pacific Ocean, rather than into the aquifers and reservoirs that could make the best use of it. Rain, for me, signals an opportunity to make soup, which matches inclement weather the way pearls go with Sophia Loren’s exquisite neck.

In my youth, tomato soup meant a can of Campbell’s, made famous by Andy Warhol. My late and much beloved mom used to prepare it in high style, diluting it with milk rather than water for an instant “cream of tomato” concoction, which remained the gold standard for tomato soup in my estimation until well into my adulthood. One weekend in my thirties, though, on a trip to Lake Tahoe, I tasted freshly prepared tomato soup for the first time, and it was nothing short of revelatory. I’ve been spoiled ever since.

DIRECTIONS:
First, heat the olive oil in a soup pot, then add the diced onion at medium heat. Sweat the onion, allowing it to release its liquids, but don’t brown it. Add the Cup4Cup gluten-free flour, and stir, making sure to break up any lumps that might ensue (a whisk is good at doing this). Add the garlic and cook for about two minutes, stirring occasionally. Then add the tomatoes, broth (a simple way to measure this is to fill up the empty tomato can), chopped fresh dill, bay leaf, salt, and pepper.

Cook over medium low heat, stirring occasionally, for about 30 minutes, but you needn’t be particularly fussy about the timing; it’s just enough to let the flavours blend.

From here, you have a couple of options. 1) Allow the soup to cool overnight in the refrigerator, and serve it the following day as a rustic cold soup, garnished with a dill sprig (and remember to remove the bay leaf!).

A quick trip to the Vita-Mix.

2) Alternatively, you can remove the bay leaf, toss it in the food processor and purée it. Be sure to work in small batches, and DON’T plug the feeding tube unless you’d like your kitchen walls redecorated with a fine spray of tomato soup. [The steam needs somewhere to go; best bet is to drape a kitchen towel LOOSELY over the top of the feeding tube.]

You can add a delightfully silky texture by stirring a dollop of cashew cream into each bowl (or cup). Garnish with a dill sprig, and serve.