How in the world did we ever get from this…

Savory & Vibrant. It even says so.

Funny story, that. It involves a Scots drama critic’s first play, a British star of stage and screen, and a classically-trained hotel chef. [If you just want to skip ahead to the recipe for Green Goddess Potato Salad, not to worry. Just jump down a page or three.]

In 1920, drama critic William Archer took his own advice (from his 1912 non-fiction book Play-Making: A Manual of Craftsmanship) and wrote his first play, something of a pot-boiler called The Green Goddess. It opened, to some acclaim, on 27 Deceember 1920, at the Walnut Street Theatre in Philadelphia, and starred a gentleman named George Arliss. So popular was it that it opened on Broadway (at the Booth Theatre) less than a month later, and toured America for the better part of three years before opening a highly successful (and lengthy) engagement in London.

Along the way — and by the best triangulation available to me, sometime around March of 1923 — it played in San Francisco. While in The City, Arliss stayed at the Palace Hotel (which is still around, incidentally), and dined at the hotel’s restaurant, which at the time was overseen by Executive Chef Philip Roemer. Depending on which story you want to believe, either the chef decided on his own to honour Arliss with a salad dressing inspired by the play, or Arliss himself put the chef up to it as a publicity stunt. Personally, I would like to think the former.

And, before you could say, “Wow, I wonder if this salad topping will still be around and popular nearly a century later,” Roemer had created the Green Goddess dressing. [Before we get into the actual recipe stuff, a couple of notes. Not only was the play successful, but it was made into a movie twice (both times starring Arliss), once as a silent in 1923, and once as a “talkie” in 1930. It’s worth noting that the goddess was more grey than green, as both films were shot in black and white. Arliss was nominated for the Best Actor Academy Award for the 1930 version (he had won the previous year for Disraeli), but ultimately lost to Lionel Barrymore, who won his only Oscar for A Free Soul. In fact, Arliss himself presented the Oscar to Barrymore.]

Much like the salad dressing’s creation myth (even the hotel’s own website has gotten it wrong, predating the play’s creation by half a decade), the “official” recipes for Green Goddess dressing vary widely. And while I mean no disrespect to any of the bottled versions’ manufacturers, do have a go at making it yourself. It’s dead simple, and it tastes so much better. As for the potato salad, which calls in the original recipe for green beans, I think asparagus (if available fresh) is better suited to it. Both provide a bit of toothiness, but roasted asparagus and roasted potatoes mesh like Ginger Rogers and Fred Astaire. 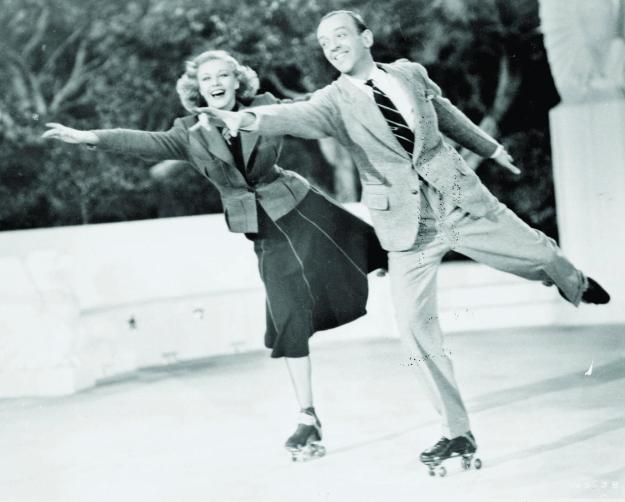 “Fred, I can’t believe he compared us to vegetables! He can’t even DANCE!” 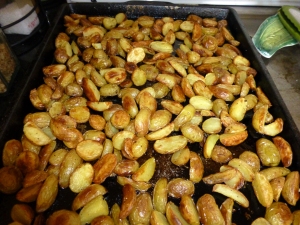 Preheat oven to 450°F/230°C Halve or quarter potatoes and place in plastic bag with olive oil; shake until coated and arrange in a single layer on a cookie sheet. Liberally sprinkle salt and pepper over. Roast for about 30-35 minutes, or until golden brown. (About 20 minutes in, turn over with spatula for even roasting.) Remove when done, allow to cool, and place in large mixing bowl.

Chopped spears that have nothing to do with Britney.

Preheat oven to 400°F/200°C Wash and trim and place in plastic bag with olive oil (you can use the bag from the potatoes if you wish, although you may need to add a little olive oil); shake until coated and arrange in a single layer on a cookie sheet. Liberally sprinkle salt and pepper over. Roast for about 15-20 minutes, or until slightly browned, but still with a little snap. Remove when done, allow to cool, chop into 1 inch/2.5 cm pieces, and place in large mixing bowl with potatoes. Mix with Green Goddess dressing and chill for 1-2 hours in refrigerator. Devour unreservedly.

Pulse mayonnaise, sour cream, vinegar, scallions, anchovies, parsley, tarragon, salt, and pepper in a food processor until dressing is pale green and herbs are finely chopped. Refrigerate until use. Editor’s note: You don’t have to be either green or a goddess to make this salad spectacular. Although either would certainly enhance the presentation.

The finished salad, with wooden fish.

Note on metric conversions:
Since American measurements are generally based on volume rather than weight, I’ve had to be a little loose with the metric conversions. For liquids, of course, they are pretty precise, but for dry ingredients, they’re a little more fungible (after all, a tablespoon of salt weighs a lot more than a tablespoon of dried parsley flakes). That said, the Interwebs have some conversion guides that have allowed me to get close, and fortunately, this recipe is pretty forgiving. I suppose in future that I would be wise to use my fabulous OXO Good Grips Stainless Steel Food Scale with Pull-Out Display to give an accurate measurement. But wisdom was never my long suit.

One thought on “All Hail the Green Goddess! (plus a godlike potato salad recipe)”