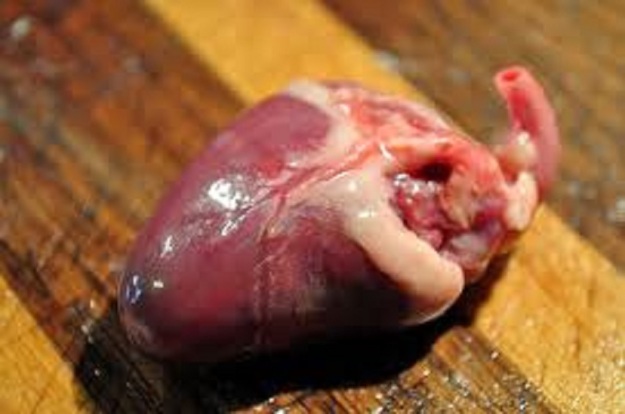 Seventy-six years ago, the brilliant radio dramatist Arch Oboler wrote a radio play for the NBC series Lights Out called, simply, “Chicken Heart.” The main thrust of the story was that a science experiment had gone terribly, terribly wrong, and what once was a harmless, knuckle-sized, garden variety chicken heart had grown to gargantuan proportions, and was — LUB-DUB, LUB-DUB, LUB-DUB — threatening to take over the world. Good times.

As intended, the story terrified a very young and impressionable Bill Cosby, as well as many others, enough so that the story was repeated the following year and again in 1942. It is still regarded as one of the finest examples of radio drama’s darker side.

I wasn’t around seventy-six years ago, but I was around in 1966, when Cosby described the depth of his dread on the album Wonderfulness. Like most kids in North America, I wasn’t predisposed to eating organ meats anyway, and the now-disgraced comedian’s riff on Oboler’s play gave me one more reason to avoid the deadly chicken heart.

Jump forward forty-seven years or so, to August of 2013. I happened to be shopping in Mitsuwa Marketplace, an Asian grocery store complex that’s one of my favourite local haunts. Other folks, when they go overseas, visit temples or museums or strip clubs. I visit grocery stores. [Yeah, and temples and museums as well. Strip clubs, not so much.] In between travel jaunts, I try to find the most “foreign” grocery stores I can, preferably ones that don’t have English-speaking help. Mitsuwa is as close as I can get to Japan without going into the Little Tokyo section of downtown LA.

While there, I came across a bottle of yuzu honey. Yuzu, for those of you unfamiliar with it, is an Asian citrus fruit not seen much in the United States except in extracted form, and that generally only in Asian markets. It tastes something like a cross between a lemon, a grapefruit, and a tangerine. It’s really quite a fetching fruit, so I picked up the bottle of “honey” (at $12.99 for 33.86 oz./980g) and tried to figure out what I might do with it. [I put quotes around the word “honey” because its main ingredient is high fructose corn syrup.]

Perhaps because I’d been hankering to visit a (now shuttered) local restaurant called Corazón y Miel (Spanish for “Heart and Honey”), I flashed on the idea of glazing chicken hearts with the yuzu honey. Heck, if the name was good enough to carry a restaurant, it certainly should be able to carry a meal.

This may come as a shock to you, but the Interwebs are not exactly chock-full of chicken heart recipes; nor were any of the cookbooks that were immediately at hand. The best piece of advice I got was that chicken hearts should be cooked either very quickly or very slowly; anywhere in between is likely to result in a tough heart, and who wants that? I did stumble across a blog called Cooking in Sens, which had an interesting recipe for a Chicken Heart and Pepper Stir Fry, and I took some inspiration, if not a recipe, from them.

Ingredients
2 dozen or so chicken hearts
1 cup soy sauce (or tamari sauce)
4 cloves garlic, minced
1/2 cup yuzu honey (or honey with a blast of 2-3 tbsp. of some citrus juice, with zest from one lemon or orange)
Kosher salt

Wash chicken hearts, removing as much blood as possible (it is a heart after all). Then trim off the gristle-y bit of connective tissue at the top of the heart (you should NOT remove all the fat). [See picture below.]

Place cleaned chicken hearts, minced garlic, and soy (or tamari) sauce in plastic bag. Seal, and marinate in refrigerator for 30 minutes to 2 hours, depending on the degree to which time is a factor in getting the meal to table.

After marinating the hearts, you have a couple of options; you can either pan fry them, or grill them. I chose the grill because my stove top was taken up with rice and stir-fry veggies, so it was an easy choice. Just season them with a little kosher salt and skewer them on either a metal skewer or a pre-soaked bamboo skewer (don’t want it catching fire or turning to ash on the grill). In either event, you’ll want to pre-heat the grill or the oil in the pan.

Cook them about two minutes per side, or just as soon as they can be lifted from the grill without sticking. When you first lay them down, brush half the honey on the top side of the hearts; when you turn them over, brush the remaining honey on the now-browned side. After 4-5 minutes (TOTAL!), you can take them off, and they’ll be perfect.

Because my sous chef was me, I placed the hearts into a 200°F/95°C oven just to keep them warm while I finished off the stir-fry veg and rice. They were in the oven for about 15 minutes or so, to no ill effect. When combined with the rice and veg (which themselves had been augmented by a yuzu seasoning base), they made a — ahem — hearty meal.

A different way of approaching chicken and rice.

[NOTE: The price on the yuzu seasoning base in the link is confiscatory, and I only put the link in to show you the bottle. It (or something very close) should be available at your local Asian market for something in the neighborhood of three to four dollars or so, if memory serves. For goodness sake, don’t spend $20 on a tiny bottle of yuzu seasoning base. Its ingredients are water, yuzu juice, vinegar, citric acid, orange juice concentrate, evaporated cane juice, yuzu oil, and the ubiquitous “natural flavour.” A little lime juice, vinegar, sugar, and water (with some lime zest, if it’s handy) will work perfectly fine as a substitute.]