Sell by? It will have been long gone by.

I’ve been grilling leg of lamb for about half my life now (which is to say over 30 years), and I was excited to try our new pellet smoker to find out how it stacked up against the various other methods (Big Green Egg, gas grill, trad charcoal grill) I’ve employed before.

You don’t need to follow me down the rabbit hole unless you’re slightly — like me — monomaniacal about research prior to grillage. If you are, I suggest these YouTube vids, one from Malcom Reed’s HowToBBQRight, the other from Darnell McGavock Sr.’s D Grill. Both of them used electric pellet smokers, so they were the most relevant to my immediate project, but I also watched a bunch of others. The reason I frequently turn to YouTube first is to see the actual cooks and their process(es) in motion, as well as to hear comments they might not bother to include in a printed recipe. [I also visited Steven Raichlen’s very informative online home, which I recommend highly.]

Originally, my intention was to make pulled lamb, which in theory comes off the smoke at a higher temp than your standard smoked leg. From what I’ve read (at least in terms of pork), there are two sweet spots for removing meat from the grill/smoker: one is about 145-150°F/63-65.5°C, the other is about 195-203°F/90-95°C. Apparently, the in-between is the “tough zone.” I’ve encountered this phenomenon before when cooking octopus, squid, and shrimp (not always on the grill), so it doesn’t surprise me. Perhaps a quick revisit to Harold McGee’s On Food and Cooking: The Science and Lore of the Kitchen will yield an answer as to why, but that’s for another post. I opted not to pursue the higher finished temperature, because I read that the leg was not sufficiently possessed of marbling fat to make it tender at that temp; that recipe recommended bone-in lamb shoulder instead.

Lose some, but not all, the fat.

PREP
No matter how thoroughly your butcher trims the fat off your lamb leg, it’s not enough. You don’t want to take all the fat away, but an excess will give it that “gamy” taste that causes people to think they don’t like lamb. You can see in the lower right of the photo above how much fat I excised. I cut the leg about 60/40%, because I was feeling a bit experimentative, both in terms of marinating and cooking. 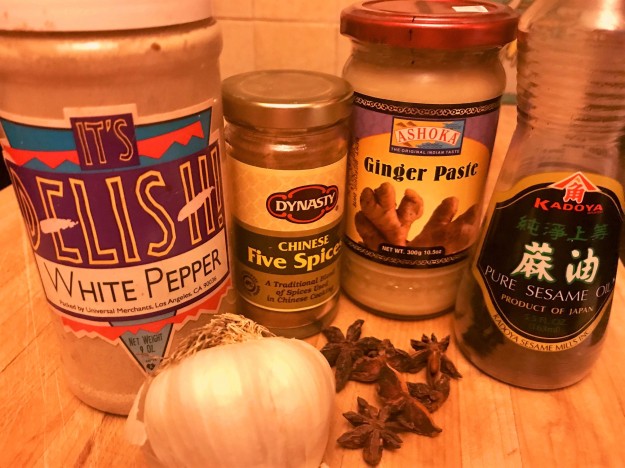 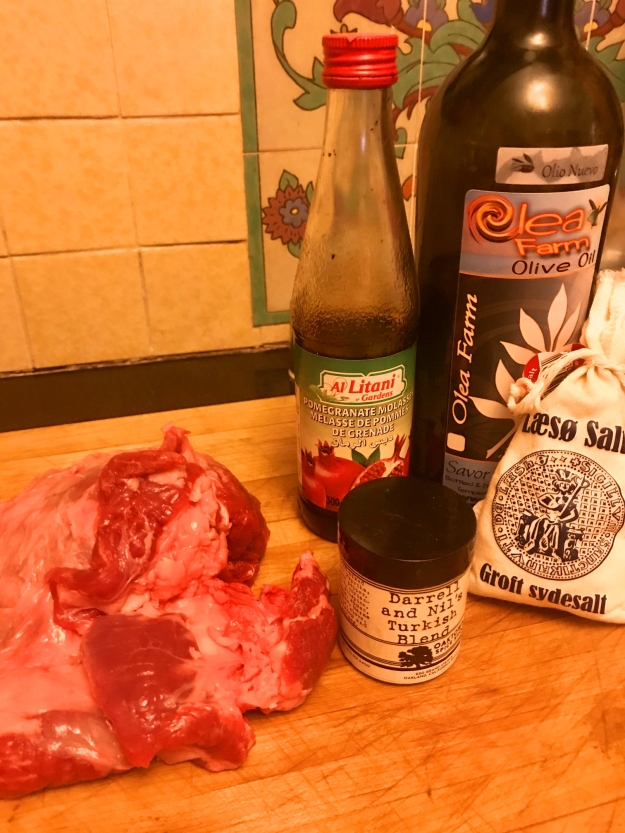 *Yeah, you’re gonna have a tough time finding that. It’s made from paprika, black pepper, cumin, coriander, allspice, cassia, sumac, oregano, Maras chile, clove, cardamom, and nutmeg. Maybe I can get them to cough up the actual recipe, but if not, make sure you include the sumac and Maras chile, which really push the blend toward Istanbul. 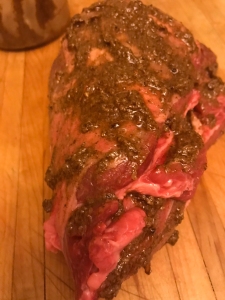 Rub rub rub it in; get your fingers into it; don’t be shy.

Rub it in to all the cracks and crevasses, and allow the lamb to chill overnight in the fridge. Due to a scheduling conflict, I left it in for two nights. Not a problem.

A WORD ON PELLET SMOKING

Ask 15 pitmasters what the best type of wood for smoking lamb might be, and you’ll get 67¾ answers. After way too much agita, I succumbed to crowdsourcing and went with Amazon’s Choice, Traeger’s Signature Blend (their hickory pellets were the #1 Best Seller). I am sure that at some point in the future, I will have a hankering to try a specific type of wood with a specific recipe, but this wasn’t it. Think Ford, not Ferrari. 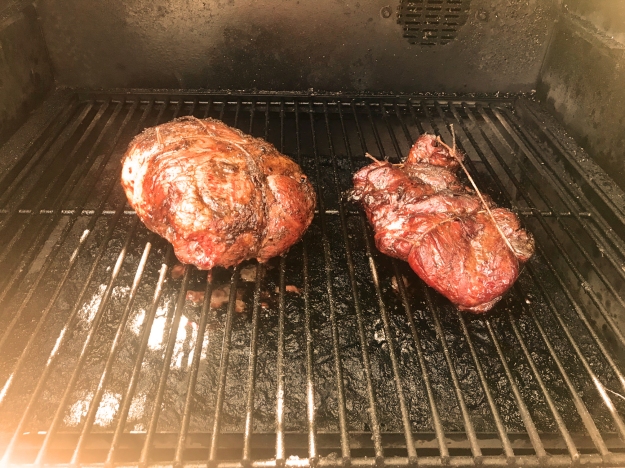 A little over an hour in the smoker. Some colour, but no “bark.”

I checked the pellet level and fired up the smoker, letting the machine come up to temp (250°F/121°C) while I took the lamb out of the chill chest and tied it up with butcher’s twine to help ensure an even roast. 20 minutes later, I placed the pieces fat side up on the grill and left them alone, apart from one quick peek about halfway through to see if they needed to be swaddled in aluminum foil to keep from drying out (they didn’t). After 3.5 hours on the electric pellet smoker at 250°F/121°C, the one on the left came off at an internal temp of 148°F/64.4°C, the one on the right came off at an internal temp of 166°F/74.4°C (which is regarded as the high end of acceptable for lamb). Obviously, the marinades made some difference in the appearance of the two pieces, and I can say that the 166°F/74.4°C piece was not quite as tender as the other one, though both were highly acceptable, texture-wise, and both were absolutely delicious.

After the meat rested, I popped it back in the fridge for a few hours, but it re-emerged at dinnertime for “lambwiches” (lamb sandwich with rocket and mayo on a Kaiser roll). Still moist and tender, full of flavour. And hands down, the most effortless process for leg of lamb I’ve found yet. Just like I would be happy with my Instant Pot even if I used it for nothing other than beans, I’m thrilled with the Camp Chef SmokePro DLX even if it only ever gets used for lamb… which it surely won’t.