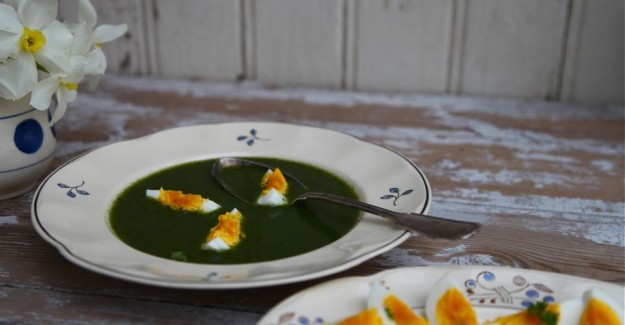 In a perfect world, I’d have a beautiful serving shot for you, but I froze the soup for a friend, so here’s one I nicked from the Queen of Kammebornia.

I’m continually surprised by the lengths to which our species will go to get food. Olives give us stomach aches straight from the tree? Maybe soak them in lye, then, because a little lye makes everything tasty. Rhubarb leaves are potentially deadly? Okay, let’s just harvest the stalks, and see if they won’t kill us. Nettles sting us when we touch them? Then we’ll boil them, and then perhaps they won’t sting.

I completely apprehend the ancient sensibility of finding local greens, boiling them, and consuming the broth. In every culture, you can find some version of this basic idea. Maritimers all over the globe even harvested seaweed, which makes for a magnificent, if humble, soup.

So far, a credible origin story for the Swedish version of this soup has not emerged, but since there are similar versions of it in Ireland, Scotland, and Native American culture, I’m presuming that the arc of its development was probably not that of something being spread from a single source, but a soup with a parallel evolution wherever Urtica dioica flourished (originally Europe, Asia, and western North Africa, but now pretty much everywhere). The bottom line is that it is ancient, dating back to the Bronze Age, and if something has persisted that long, there’s a reason.

I dug through dozens of recipes to arrive at this one, many of them Google Translated from Swedish. If you go out hunting on your own, don’t be put off by instructions for chopping nostrils, or be dissuaded by “raspberry soup” mistranslations. So long as you handle the raw nettles with care, your nostrils are safe. You will want to use gloves or tongs for the initial cleansing, though. Gotta respect a plant that employs not only miniscule thorns, but also formic acid, to try to keep itself safe from the likes of soup-making us.

This can easily be adapted to a vegan recipe by omitting the eggs, crème fraîche/sour cream, and chicken stock. Be sure to use a really good vegetable stock to get the depth of flavour the soup deserves. Roasting the vegetables before putting them in the stock is a must for this recipe.

Have a care with these before they’re given the hot broth bath.

Ready for the purée.

DIRECTIONS
Rinse nettles thoroughly, picking out grass and any foreign objects, then drain. In a large pan, heat the oil, thyme, salt, and white pepper, and then sauté the onion for about 5 minutes, until soft without colouring. Add the water and stock. Bring to a boil and then add nettles. Cover and simmer for about 20 minutes. Using immersion blender, purée soup until smooth (or use food processor/VitaMix). Dissolve the potato starch in a little water and stir it into the soup. Bring back to a gentle boil, stirring regularly until it thickens slightly. Check and adjust the seasoning. Serve hot with quartered or halved hard-boiled eggs, chopped chives, and a dollop of sour cream or crème fraîche. 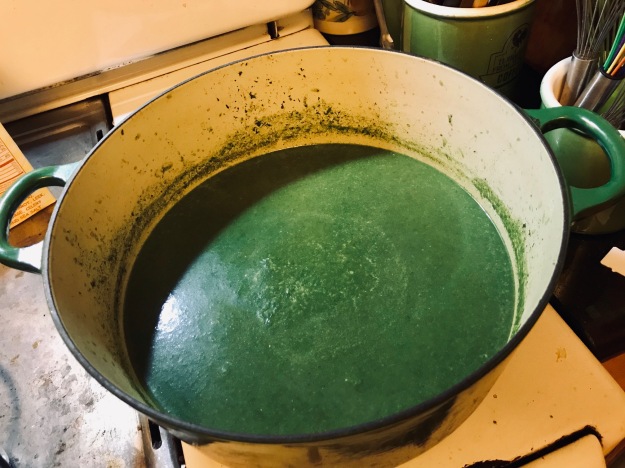 Despite what Kermit said, it actually is easy being green.