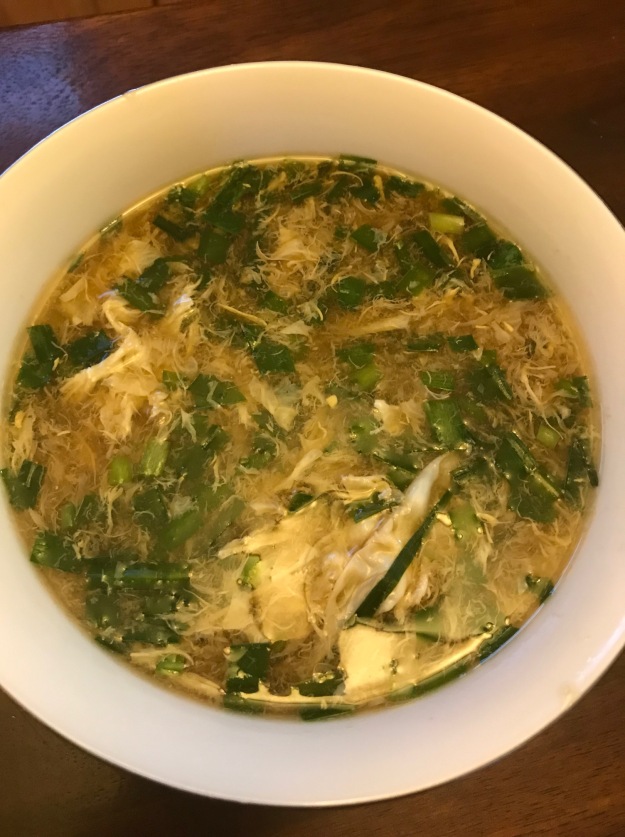 Let me say this right up front: working with lemongrass is a pain in the ass. When I discover pieces of it in tom kha gai, it’s always like tasty little bits of indigestible wood, and I never have a graceful way of disposing of them. In theory, you can pound it into paste, but since I don’t have a four-ton press hanging about, I haven’t done that. I may try chopping it up and popping it in the Vita-Mixer with a little liquid to see if I can get something useful, and when that happens, I will share the consequences, even it it results in having to replace the Vita-Mixer. That said, lemongrass tastes so good, it’s worth the effort.

Today, I decided to throw about a dozen stalks and three liters of filtered water into the Instant Pot® and make, in essence, lemongrass broth. It was almost like a tea; fairly aromatic, but somewhat insubstantial, so I threw in some Better Than Bouillon stock paste for good measure. A couple of recent impulse purchases meant that I had a dozen duck eggs and a gigantic bag of Chinese leeks laying about, so I went improv in a big way. I’ve always liked egg drop soup, so I thought I’d try my hand at it. Simple simple simple.

The first chore was to clean the lemongrass, which had a fair amount of residual dirt, and then chop off the bits that weren’t going to be useful. The New York Times food section website has an excellent video on just how to do that. I did not bruise the lemongrass first, figuring that there was no need to leave any of those aromatic oils on my butcher block; the Instant Pot®’s pressure cooking function was adequate to force them into the broth. 30 minutes of high pressure with a natural release was just fine, as I was in the midst of doing other stuff at the time. Yay for multitasking, especially when a machine takes on half the tasks.

After the lemongrass broth was complete, I added the Better Than Bouillon stock paste to give the broth some heft, and added a little potato starch for thickening. The Chinese leeks are actually more similar to garlic chives than traditional leeks in taste and texture, and a quick clean and chop rendered them soup-ready. For the finale, a couple of duck eggs (or chicken eggs, if that’s what you have) pulled it all together. I could easily have gone more complex with spices or seasonings, but the stock paste brought sufficient salt into the equation, and I wanted to let the rest of the ingredients speak for themselves. A tablespoon or two of fish sauce would have been a welcome addition on some other day, and you’re welcome to play with your own mix. I can even imagine a place for some five spice powder or star anise as potential components, but on this day in this place, I opted for simplicity and it tasted fresh and good.

The technique for “dropping the egg” is pretty straightforward. whisk a couple of eggs in a Pyrex® measuring cup, then whisk a couple of ladles of the hot broth into the eggs. At that point, you can drizzle the egg-broth mixture into the hot soup a bit at a time as you stir the soup. Voila: egg threads. Done and done. I served it in bowls because it was hot and needed the surface area to cool a bit, but mugs are fine serving vessels as well.

Tiny for leeks, aren’t they?

DIRECTIONS
Clean and chop lemongrass (see video for technique). Add to Instant Pot® with 3.5 liters / 15 cups water. Turn lever on lid to “Sealing” (rather than “Venting”) and press the “Soup” button, adjusting the time to 30 minutes if necessary. When cycle is done, allow to depressurize naturally or turn lever to “Venting,” depending on your time constraints. Remove lemongrass stalks and add stock base and chopped Chinese leeks. Turn Instant Pot® off, then press the “Saute” button to heat the soup base. Whisk together potato starch and a small amount of stock (approximately 125 ml / ½ cup) to form a slurry; gradually add another 125 ml / ½ cup of stock while whisking, then add the thickened stock to the Instant Pot® container.