Despite the widely-held belief that “it never rains in southern California,” it does, albeit not often enough. Tonight, for instance, was a prime example of the occasionally intemperate nature of SoCal weather; a much-needed downpour, most of which would wind up in storm drains on a quick trip to the Pacific Ocean, rather than into the aquifers and reservoirs that could make the best use of it. Rain, for me, signals an opportunity to make soup, which matches inclement weather the way pearls go with Sophia Loren’s exquisite neck.

In my youth, tomato soup meant a can of Campbell’s, made famous by Andy Warhol. My late and much beloved mom used to prepare it in high style, diluting it with milk rather than water for an instant “cream of tomato” concoction, which remained the gold standard for tomato soup in my estimation until well into my adulthood. One weekend in my thirties, though, on a trip to Lake Tahoe, I tasted freshly prepared tomato soup for the first time, and it was nothing short of revelatory. I’ve been spoiled ever since. 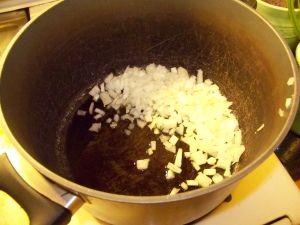 DIRECTIONS:
First, heat the olive oil in a soup pot, then add the diced onion at medium heat. Sweat the onion, allowing it to release its liquids, but don’t brown it. Add the Cup4Cup gluten-free flour, and stir, making sure to break up any lumps that might ensue (a whisk is good at doing this). Add the garlic and cook for about two minutes, stirring occasionally. Then add the tomatoes, broth (a simple way to measure this is to fill up the empty tomato can), chopped fresh dill, bay leaf, salt, and pepper.

Cook over medium low heat, stirring occasionally, for about 30 minutes, but you needn’t be particularly fussy about the timing; it’s just enough to let the flavours blend.

From here, you have a couple of options. 1) Allow the soup to cool overnight in the refrigerator, and serve it the following day as a rustic cold soup, garnished with a dill sprig (and remember to remove the bay leaf!).

A quick trip to the Vita-Mix.

2) Alternatively, you can remove the bay leaf, toss it in the food processor and purée it. Be sure to work in small batches, and DON’T plug the feeding tube unless you’d like your kitchen walls redecorated with a fine spray of tomato soup. [The steam needs somewhere to go; best bet is to drape a kitchen towel LOOSELY over the top of the feeding tube.]

You can add a delightfully silky texture by stirring a dollop of cashew cream into each bowl (or cup). Garnish with a dill sprig, and serve.