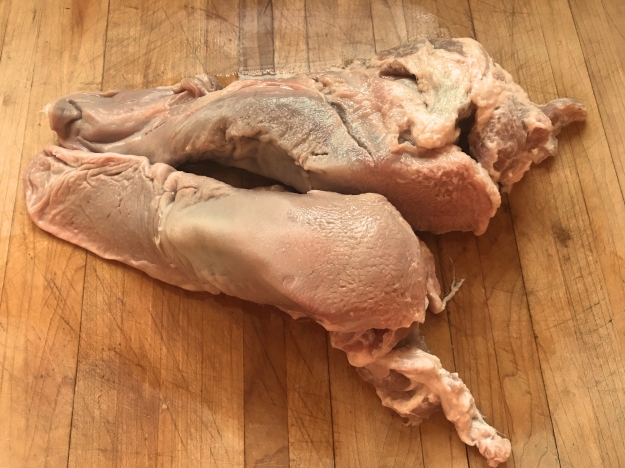 I’ve mentioned in other places that the idea of eating an animal’s tongue is usually met with some, um, hesitancy by my Anglo friends, with the general exception of Jewish carnivores (though they tend to eat beef tongue rather than pork). Latinx, of course, have a rich history with this cut, and virtually any taco truck worth its sal will have lengua as a meat option. In a perfect world, I’d love to make this barbacoa style, but I’m too lazy to go to all that effort for just the bride and me (not to mention for a mere two pounds of tongue), so I’m going to smoke it instead.

Into the Instant Pot® for a quick bath.

I think one of the reasons that people are reticent to try tongue is that they don’t want to taste what the pig’s already eaten, and I get that. In fact, though, the surface of the tongue (including the rough part studded with lingual papillae) is removed in this particular preparation, though it isn’t in all recipes. One method for removing this stratum is to boil the tongue for about an hour and then use a knife to slice off the surface, but I’ve found that 40 minutes or so in a pressure cooker accomplishes the task even better (I threw in some Rancho Gordo Mexican oregano as an aromatic as well). Most of the surface could easily be peeled off by hand, and the rest I trimmed up with my Global chef’s knife.

When it came to a rub for the smoker, I wasn’t shooting for anything fancy; just some salt, black pepper, and pimentón de la Vera (Spanish smoked paprika, both to enhance the smokiness and because it reminds me of my beloved Galicia). I set the dial of my electric pellet smoker for “Hi Smoke” (average temp about 210°F / 100°C, though it varied by some 15°F / 8°C over the course of the cook). [For those of you who obsess over such details, the pellets I used were Traeger Grills Signature Blend pellets, made from hickory, maple, and cherry woods.] 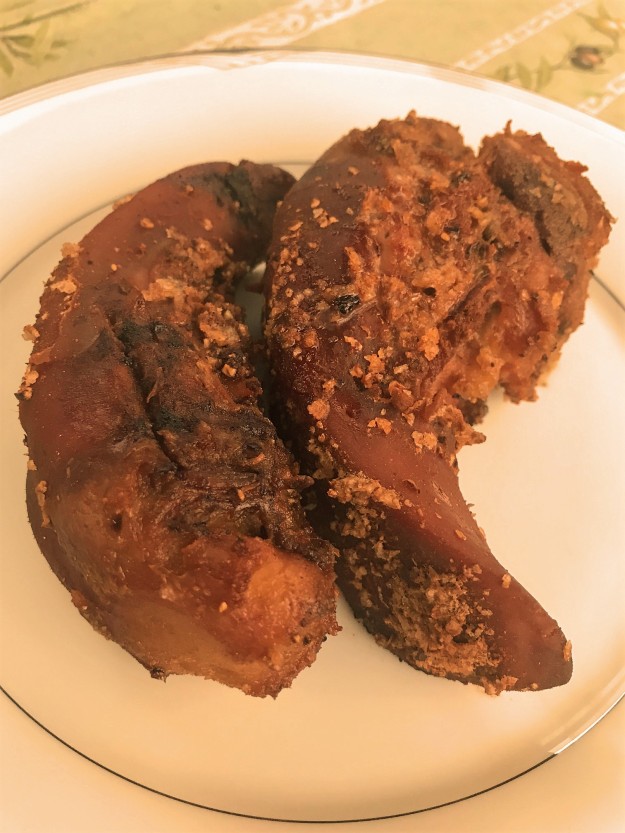 Fresh out of the smoker.

After an hour and a half in the smoker, the internal temp registered 177.5°F / 80.8°C, which was just a shade higher than most of the recipes I’d read suggested (though a couple said 150°F / 65.5°C was where they pulled it out). Since I wasn’t planning on making tongue jerky, I removed it and gave it 25-ish minutes to rest before trying a slice.

Rinse off meat in cold water, pat dry. Place in Dutch oven or pasta pot. Cover with water and add a pinch of Mexican oregano flakes, bring to a boil on stovetop, then simmer, covered, for one hour OR cook on steaming rack in pressure cooker for 40-45 minutes on high pressure (add 1.5 cups / 350 ml water and pinch of Mexican oregano flakes for aroma). Remove meat and allow to cool, then peel tongue with chef’s knife or by hand.

Make spice rub with salt, pimentón de la Vera, and black pepper. Rub liberally into meat, making sure to get rub into any nooks.

Place on smoker for approximately 90 minutes, or until internal temp registers 175°F / 79.5°C, then remove and allow meat to rest at least 20 minutes before slicing.

Just had a slice, and boy, is it tender. Now all I need is a bolillo or a Kaiser roll, some mayo and either mustard or bbq sauce, maybe some of the living butter lettuce we have in the fridge, and I’ll be one happy camper… even if I’m not at Cantina Río Coves in Galicia.