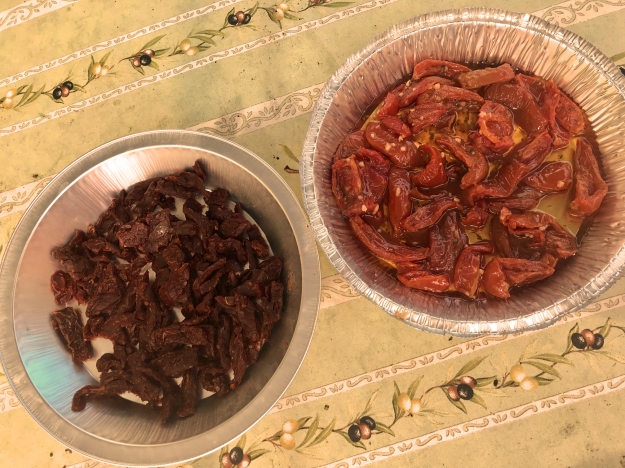 Sun-dried on the left; roasted and packed in oil on the right. 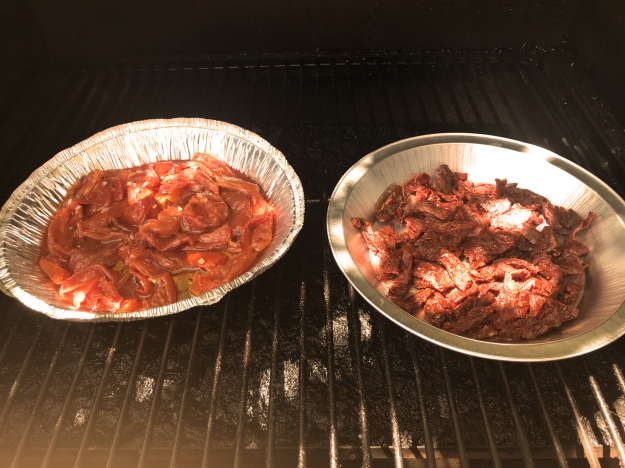 This time, the sun-dried tomatoes are on the right.

I put them in the smoker at 175°F / 80°C for 15 minutes and checked them; no apparent smoky taste. So I turned the smoker to the “Lo Smoke” setting, which (somewhat counterintuitively) produces more smoke. [According to the mfr., Lo Smoke temp runs about 175°F / 80°C, Hi Smoke about 210°F / 100°C, and that on both settings the auger timing is slightly slowed, allowing pellets to smolder more than burn. In case you’re wondering, I used the Traeger Grills Signature Blend pellets, made from hickory, maple, and cherry woods.]

After 15 more minutes, I was sensing a bit of smokiness, but the tomatoes’ concentrated flavour still wasn’t permitting much to come through. By 45 minutes in, the smoke seemed more noticeable, but still not quite where I intended it to be. My concern at this point was not to allow the tomatoes to turn acrid, which over-smoking will do to just about anything if you aren’t careful. So I set the timer for one more 15-minute jaunt. 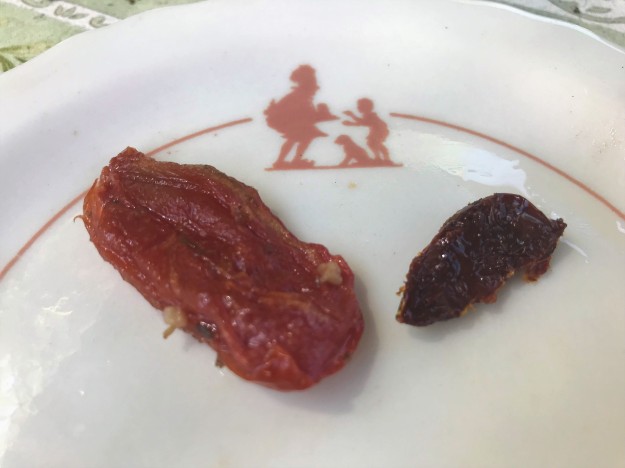 Roasted on the left, sun-dried on the right, looking pretty much as they did when they started, but tasting noticeably different.

Huzzah! Just the edge I was looking for. I put the roasted tomatoes and their oil back into their original jar, and I popped the sun-dried strips into a Snapware Glasslock storage container with a little Olea Farm rosemary olive oil.

Two takeaways:
1) Next time I will spritz the sun-dried tomatoes with a little olive oil, or even water, because the moisture helps them take the smoke better.
2) If your pellet grill doesn’t have a “Lo Smoke” setting, I’d smoke these at 210°-230°F / 100°-110°C for about 30-45 minutes, tasting at the half-hour mark.