Gazpacho atop the Eiffel Tower. That’s what I call culture clash.

Summertime, and the livin’ is… well, pretty darn warm if you’re in the southwestern quadrant of the United States, which I am. Any excuse not to turn on the stovetop or the oven is quite welcome right around now, so I went casting about the Internets for some cold soup options.

I’m no stranger to the concept of gazpacho; my longtime go-to gazpacho recipes (both red and white) came from José Andrés, though the latter was recently challenged by a white gazpacho recipe from Michael Chiarello, who most graciously forwarded it to me personally when I was working a benefit for Paula Wolfert. He made me promise that I would not share it in print or electronically. [If you want to taste it, you should go to his restaurant in San Francisco, Coqueta. In fact, you should go there anyway, just because.]

Several recipes for this dish caught my eye, including ones from Vegetarian ‘Ventures, The Endless Meal, and Spoon Fork Bacon. There are not ginormous differences among the three of them (or mine, for that matter), so by all means go where your taste buds lead you. I wanted a dairy-free version, because I’m always on the hunt for recipes I can prepare for some lactose-averse friends who are also excellent dinner guests. And with the exception of a tiny drizzle of olive oil and a few grains of salt, there’s nary an ingredient with which even the fussiest of health Nazis could quibble.

I will insert one caveat here. Because there are relatively few ingredients, and because they are all raw (save for the beans), spend the extra time (and, if you have it, money) to procure the very freshest and best. Te juro que, the difference between a great olive oil and a decent one is like the difference between making out with Hugh Jackman and Seth Rogen. Or Eva Green and Amy Schumer. Maybe, to be more PC, it’s the difference between driving a Honda Civic and a McLaren 570GT. Now I drive a Honda Civic, and it’s a damn fine car, but it’s not transcendent. And since the monetary difference between bulk olive juice and an EVOO that’s got both a pedigree and a point of view is probably something in the nature of a sawbuck (or a sawbuck and a fin), I’m giving you permission — actually, I’m practically begging you — to indulge. 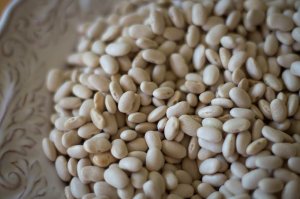 That’s where I come to point number two. Speed and convenience would dictate the use of canned white beans. I get it. I have used them often, and will in the future, should I be pressed for time. But I invested a whopping $5.95 for a pound of Rancho Gordo dried Alubia Blanca beans, and I took the 30 seconds of prep, the 35-ish minutes of pressure cooking in my Instant Pot, and the overnight stay in the chill chest to give this gazpacho an extra touch of class. The Alubia Blancas have excellent texture, a skin that virtually disappears, and a subtle but lovely taste that’s worth the effort. This is more like the difference between driving a Camaro and a McLaren, but again, a very affordable luxury. And you’ll have a bunch of beans left over for another recipe.

Did I mention no cooking? I happen to have a fairly ancient Vita-Mixer I got off Craigslist, and I heartily recommend going a bit retro in this case. More metal, less plastic, fully functional, and a whale of a lot cheaper. If you don’t have one, this recipe can be easily replicated in any food processor with a decent size bowl, although you may have to do it in multiple passes.

There’s a reason you strain. Fiber has its purposes, but taste is rarely one of them. You’ll probably end up with 1/3 to 1/2 cup of solids that will serve better as compost than dinner.

Directions:
1. Slice fresh kernels off the cob (and reserve one ear’s worth of kernels for garnish).
2. Place the corn and remaining ingredients (including the corn “milk,” if there is any) into a food processor or Vita-Mix and thoroughly blend until smooth, 3 to 4 minutes. Refrigerate mixture for at least an hour.
3. Strain mixture through a sieve or China cap. Return strained gazpacho to refrigerator.
4. When ready to serve, adjust seasonings.
5. Ladle gazpacho into coupes or bowls and garnish with raw corn, cilantro, olive oil, and salt. Serve.

Garnishes are usually mere fripperies, but here they make a huge difference. The corn kernels punch up the sweetness, the cilantro gives the soup some leafy, chlorophyll-y interest (you could use basil or thyme if you were of a mind), and the olive oil provides a certain elegance. The salt (which is black thanks to the addition of carbon) brings some visual interest and some depth. I’m hooked on finishing salts, and this one was sent to me by a friend who lives in Denmark, so it makes me smile when I use it. It’s okay to use an ingredient just because it makes the dish pretty or because it stirs a fond memory.

I may wind up substituting pimentón de la Vera for the cayenne pepper in a future batch. I guarantee there will be many future batches.