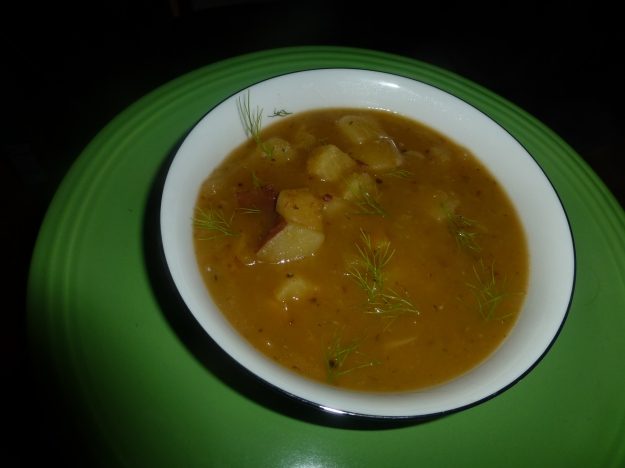 It would seem that the most likely derivation of the word chowder comes from the French chaudière, meaning “boiler” (and is also an archaic French word for cauldron or kettle, from the Latin calderia). The Brits, though, not wanting to be left out of the linguistic fun, claim that the word springs from their jowter, or fishmonger. To be sure, many of the best known chowders do contain fish, but this one is a vegetable and fruit chowder that’ll stick to your ribs on a chilly night.

The original recipe was published in the excellent Cook’s Illustrated All Time Best Soups volume, and this variation was also influenced by a post on the terrific Big Girls, Small Kitchen blog and Ina Garten’s recipe for Celery Root and Apple Purée (which is very much like this soup without the vegetable broth).

I took two significant detours: I omitted the heavy cream (thus keeping the soup vegan), and substituted potato starch for wheat flour (which makes it gluten-free). Trust me, you won’t miss the cream a bit; if you process in a Vita-Mix, it will be plenty creamy, but even if you just use an immersion blender the soup will emerge a tiny bit more rustic, while still maintaining that silky mouthfeel.

When it comes to the wine, you don’t really need to use a $38 bottle of Roche 2014 Carneros Chardonnay French Oak Reserve, but damn, it was good (and you only need half a cup (or 120ml).

Special note for celiac patients: Be extra-sure that your vegetable broth is free of wheat or barley or malt products. These often show up in commercial vegetable broths and broth bases.

Soup on the boil.

Put butter, onion, fennel, and a couple of pinches of salt in a heavy-bottomed pot or Dutch oven, cook over medium heat until translucent, about 5-8 minutes. Add garlic and thyme, cook for 30 seconds to a minute until fragrant. Raise heat to high and add potato starch, stirring continuously, and cook for another 2 minutes or so. Add the wine to deglaze the pot, making sure to scrape up all the bits on the bottom; let most of the wine boil off.

Stir in the vegetable broth, celeriac, potatoes, and apples. Add bay leaf and zest your citrus over the pot. Bring to a boil and then back the heat off to a high simmer. Cover pot and cook for 35-40 minutes, stirring occasionally, until vegetables are all tender.

Remove from heat. Discard the bay leaf. Process 2/3 soup in batches; if you are using a blender or Vita-Mix, making sure to cover feed tube loosely with tea towel (do not plug it up, because steam needs to escape). Return processed soup to pot. [Alternatively, use an immersion blender to process soup, making sure to leave at least 1/3 chunky.] Season with salt and pepper to taste, and ladle into bowls. Garnish with fennel fronds and serve. Makes 6 servings.