I’ve got a beef (no pun intended) with the Food Network and the Cooking Channel. Much like MTV, they drifted away from their original vision and began offering a schedule filled with fake drama and connerie that has precious little to do with anything that happens in a kitchen, professional or amateur. People being tasked to make dishes with ingredients like licorice, chicory, hickory, foie gras, and lima beans. The self-appointed Mayor of Flavourtown swanning around the country, sunglasses dangling ridiculously off the back of his bleach-tipped head like an errant swath of toilet paper attached to a shoe. And the content-free talking-head programs where workaday foodstuffs such as pretzels and cupcakes are routinely characterized by the multiple hosts as amazing. Look: if you can be amazed by a pretzel, your kidney is going to rocket out of your dorsal abdomen when you see the northern lights or the Eiffel Tower. Also, any native English speaker who modifies the word “unique” deserves to be banished to an asteroid outside the Van Allen Belt. So I’ve pretty much gone cold turkey (albeit heirloom breed, free-range, and antibiotic-free) on them.

But when one network closes, another one opens. I discovered that one of my local PBS station’s digital sub-channels features programming from a sort of network-within-a-network: Create TV. It’s excellent, and filled with cooking friends both old and new. Julia Child. Andreas Viestad (of New Scandinavian Cooking). Rick Bayless. Steven Raichlen. Hubert Keller. And the timeless Jacques Pépin.

It was Pépin’s show that inspired me to make this soup; his version is potato-free and employs sour cream (I wanted to make mine vegan). I also wanted to tone down the heat a bit, and give it some more body. As it turned out, I had half a dozen Yukon Gold potatoes lying around, and they filled the bill nicely. But to add an extra bass note, I roasted them first. I should also offer up a hat-tip to the Kevin Is Cooking blog, whose Roasted Pasilla Chile and Potato Soup with Shredded Chicken recipe also inspired me.

Before I get into the nuts and bolts, don’t blanch at the concept of the soup using a whole head of garlic. (Don’t skimp, either.) Because the garlic is added initially as whole cloves, it’s not overwhelming (even though it is puréed later). Which reminds me: if you are using pre-minced garlic or garlic paste, dial it back… A LOT.

8 large dried Pasilla chile peppers, rehydrated (Ancho or Guajillo peppers may be substituted if necessary)
8 cups / 1.8 litres vegetable stock or water
6 medium-to-large Yukon Gold potatoes (about 3 lbs. / 1.5 kg)
2 large yellow onions, diced (about 4 cups / 600g)
1 head garlic (approximately 20-25 whole cloves)
2 + 2 tablespoons / 30ml + 30ml oil (I used garlic-infused olive oil)
1 large can (28-ounce / 793g) diced tomatoes — fire-roasted if you can get them
1 tablespoon / 3g dried oregano leaves
Salt and pepper to taste
Chopped fresh cilantro, if desired, for garnish
Vegan sour cream substitute, if desired, for garnish
Fried tortilla strips or crumbled tortilla chips, optional (check to see that they are made without lard if you are cooking for vegans)
1 sunny side up egg per bowl, optional (this invalidates the vegan-ness, so have a care) 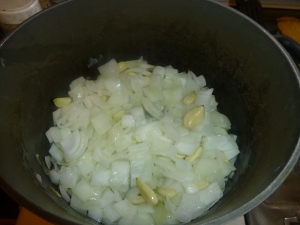 1. Soak dried Pasilla chile peppers in vegetable broth for approximately two hours. When they are rehydrated, remove them from broth, seed them and chop them roughly. Set aside. Be sure to reserve soaking broth.

2. Preheat oven to 400°F/200°C. Wash and dice potatoes into 1″ / 2.5cm cubes (you may peel them if you prefer, but it is not necessary). Place cubed potatoes into plastic bag with 2 tbsp / 30ml oil), and shake to coat. Dump potatoes out on a cookie tray and spread out into a single layer (you can line the pan with aluminum foil or parchment paper for easier cleanup). Salt lightly. Roast for 45-60 minutes, until nicely browned. [If you wish, you can turn them over midway through the roasting process, but it’s not strictly necessary.]

3. Peel garlic and dice onions. [No need to be too fancy here, since it’s all getting puréed later.] Place in large pot or Dutch oven with the remaining two tablespoons / 30ml of oil, and cook over medium heat until onions are translucent, approximately 5-7 minutes.

4. Strain in the reserved vegetable stock (this will catch any remaining seeds from the Pasilla soaking), and add chiles, potatoes, tomatoes, oregano, plus a little salt and pepper to taste (be frugal; you can always add some more later).

5. Bring soup to a boil, then reduce heat, cover partially, and cook at a simmer for 60 minutes (or longer, if you have the time). Process soup with immersion blender, food processor, or Vita-Mix. [Be very careful when you purée hot soup — leave room for steam to get out (I cover the feed tube loosely with a dish towel), and if using an immersion (stick) blender, be careful when it exits the surface of the soup, so as to avoid coating both chef and walls.] Adjust spices as necessary and serve. 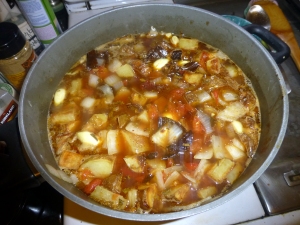