I’ve never had a happy relationship with any box grater, ever. For the most part, they are designed for a child’s hand, are honed about as sharp as Carrot Top’s wit, and embody the confidence-inspiring sturdiness of single-ply bathroom tissue. Basically, they feature one marginally useful side (pictured), while the other three are for clogging, juicing, and… I never quite figured out what that fourth side was for. On occasion, I might be able to shred cheddar, provided it nailed the precise thermal sweet spot where it neither crumbled nor smeared, which, to the best of my ability to determine it, is 2.5˚C (36.5˚ F), or just slightly colder than the interior of my fridge. Accordingly, the potential gratee usually detoured briefly to the freezer while I tried to triangulate the stay required to arrive at la température idéale. Upon its removal, I had roughly 41 nanoseconds to complete my task before the warmth of my hand and the ambient temp turned le fromage into un blob gluant. Back to the freezer, 41 more nanoseconds, again and again and again.

During the holidays, I decided to buy a new grater for The Bride as a stocking stuffer, and I was determined not to repeat the same mistake I had been making for the better part of 40 years. Enter the Microplane 4-Sided Box Grater. 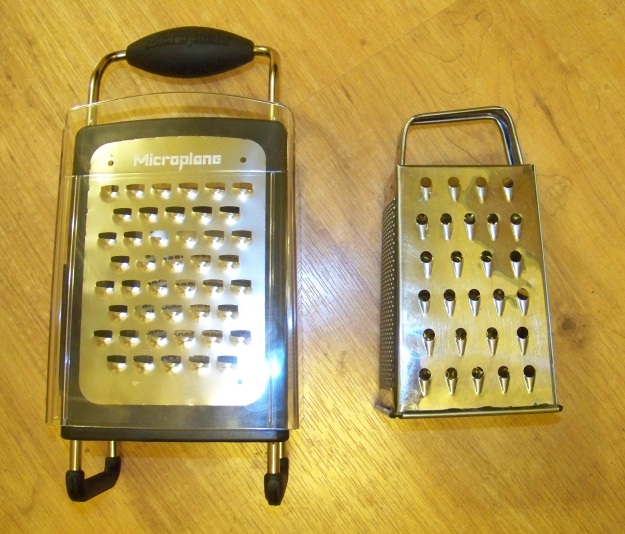 Size isn’t everything, but it does count

If there is such a thing as the Maybach Landaulet of box graters, this is it. Strike that — they don’t make Maybachs anymore, and new Rolls-Royces are just plain fugly, which this isn’t. Call it the Bentley Flying Spur of box graters; not flashy, but meticulously engineered. To extend the metaphor, if the price of the average box grater in Target’s or Tesco’s housewares section were indexed to, say, a Kia, the Microplane is gonna cost you like a Cadillac. [I think I paid $35 USD + tax for mine at Sur la Table.] But oh, what luxuries it affords. 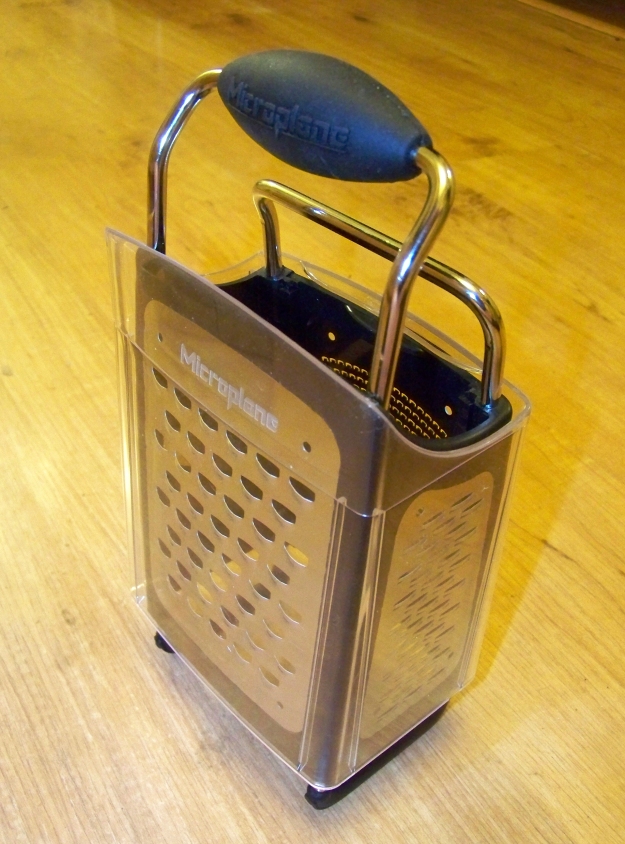 Who’s the greatest of them all?

Let’s start with the dual handle; nicely contoured for the palm of the hand, with an additional finger grip for added stability. The plasticised feet set the tool’s base about an inch above the cutting board/pan/plate surface, so you can actually see how much you’ve grated (used to be, one had to lift up the grater to peek, which meant carrot or parsnip or cheese shreds tumbled out, thereby making it impossible to set it level again without a pile of fuss). The blades, which are hella sharp, come in ultra coarse, fine, medium ribbon, and slicer sides, the latter of which provides a sort of mini-mandoline for cucumbers and carrots and the like. One of the sides even slides off so you can comfortably (and thoroughly) clean the grater’s interior. And maybe best of all, it comes with a protective plastic shield for storage, which keeps the blades sharp and your fingers safe (when reaching in the drawer for it, anyway; the usual safety cautions apply during use). No wonder it took the gold medal in the Kitchen Hand Tools category of the 2009 Housewares Design Awards.

This may not be the last box grater you’ll ever need, but it’s probably the first one you won’t regret having bought.