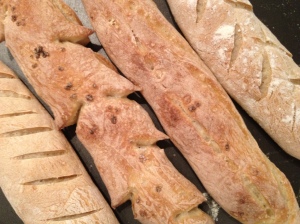 Baguettes I baked in Paris, January 2013

Because I just turned in a 1350-word piece today on Chef Herb Wilson of SushiSamba restaurant in Las Vegas for Style magazine, I’m not feeling especially loquacious this evening, but from what I understand, blogging is like exercise, and once you make some lame excuse to avoid it, it’s all downhill. Accordingly, I’ll point you instead to a fairly long piece I wrote a while ago for the LA Review of Books called “Around the Table,” in which I manifestly did not review a trio of praiseworthy books: The Table Comes First: Family, France, and the Meaning of Food, by Adam Gopnik; Dinner Chez Moi: The Fine Art of Feeding Friends, by Laura Calder; and In The Small Kitchen: 100 Recipes from Our Year of Cooking in the Real World, by Cara Eisenpress and Phoebe Lapine.

Adam Gopnik and I grew up in Philly around the same time, and for some reason that I can’t fathom (unless it’s some combination of talent, luck, drive, and the fact that I spent much of my adult life in what used to be known as the record industry), he has become a fairly famous regular contributor to the New Yorker, while I am writing a after-dinner blog post in my breakfast nook. Like me, he has an abiding love of France — you almost can’t dislike it if you ever visit, and all the advance PR about Parisians being snotty has been, in my experience, just plain untrue. 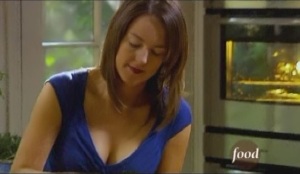 I’d probably be smitten with Laura Calder even if she weren’t such an engaging TV host, cook, and native of New Brunswick, Canada, where I also was born. Her program, irregularly scheduled on the Cooking Channel, is called French Food at Home, and it’s a breezy, fun, entertaining, and informative half hour, fifty of which have made a more or less permanent home on my DVR. This most recent book (Dinner Chez Moi) had been scheduled for an American release last year, and while that somehow that never seemed to happen, it’s readily available on the Amazon.ca site. Her casual style belies the rigorous training she received, not only in a variety of kitchens in France, but also in the Canadian Army (though her food is anything but institutional).

And finally, Cara Eisenpress and Phoebe Lapine are a pair of “quarter-life” bloggers who turned their website into an Internet sensation and a book. They have an uncommon common touch when it comes to cooking with limited resources (both in terms of space and capital), and their book contains just possibly the Best. Lentil. Recipe. Ever. I wish I’d had their insight — and focus — at their age. Actually, I’d be pretty pleased to have it even now. This is a must-have book for anyone graduating to their first apartment, and who aspire (or ought to aspire) to something more than a life of take-out. It’s practical and fun and full of great ideas for the kitchen and the informal salon that so many of us home cooks wind up hosting. 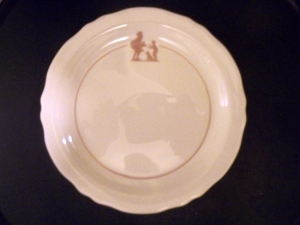 Full disclosure: Not long after my piece appeared in the LA Review of Books, I had the opportunity to meet Adam Gopnik, and because both he and I waxed rhapsodically about the joys of Howard Johnson’s in our respective works, I picked up a pair of vintage plates from HoJo’s on eBay and gave him one. The other is in my kitchen, a reminder of two ten-year-olds who grew, each quite happily, in very different directions, but for whom the phrase “28 Flavors” will always evoke a potent memory.